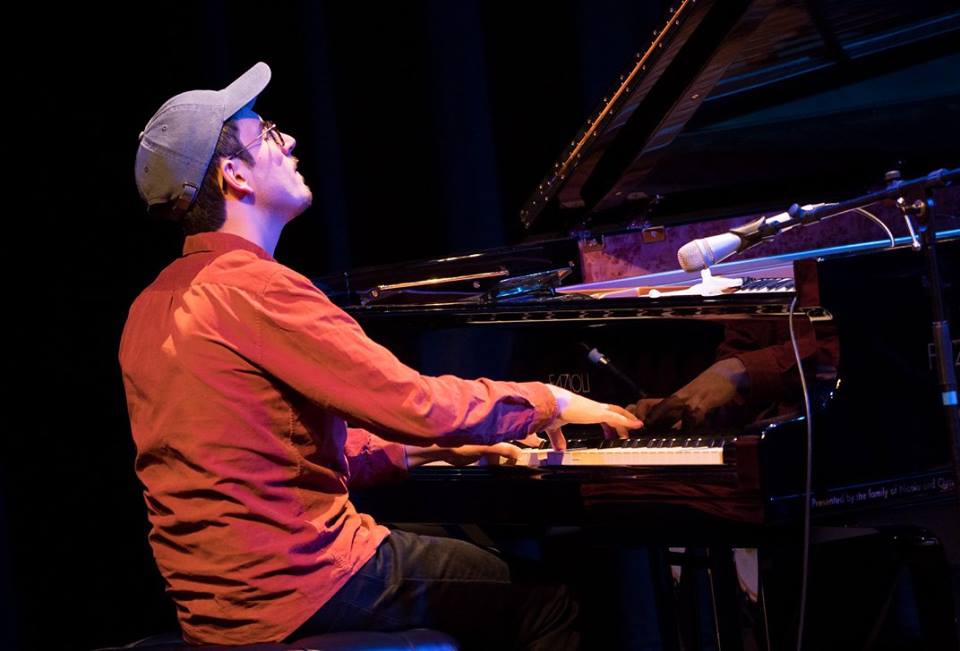 By NICK DAVIES
May 13, 2017
Sign in to view read count
Cheltenham Jazz Festival
Cheltenham, Gloucestershire
April 26 to May 1, 2017

The Cheltenham Jazz Festival saw the jazz world descend on the Regency Spa Town of Cheltenham for six days. The festival presented a mix of established jazz acts with emerging artists, complemented by stars from the soul and blues world. It was a fine balancing act and the need to sell tickets broadened the festival's approach. Once again, Festival Director, Ian George, with the support of major partner, BBC Radio 2, pulled it off with record ticket sales and continuously growing crowds.

The festival took place mainly in a conveniently situated jazz village within the town's Montpellier Gardens which housed the main venues and a free stage. Other venues included the nearby Parabola Arts Centre, the Town Hall and several other venues across town. The festival, in the past, has been confined to these areas but has recently spread out into the community with stages off the main High Street as well as pop-up performances from some of the festival artists. This inspiring innovation has worked well in bringing jazz to the local community as well as jazz enthusiasts and, as a result, the whole of Cheltenham came alive with living jazz and boasted a particularly buzzing festival fever over those six days.

The opening concert this year took place on Wednesday night, performed by the sensational Laura Mvula who brought her own brand of music to the festival. She has been doing festivals worldwide, most recently in Cape Town. The show was well received; a good opening to the week. The following night saw Dee Dee Bridgewater wowing the crowds at the Town Hall: a lovely concert, delivered in style despite having her leg in a brace after a recent fall.

On Friday evening, the Parabola Arts Centre Program started with Marius Neset who performed without his regular band. Instead, on this occasion, he was supported by an all-British collaboration of pianist Dan Nicholls, bassist Phil Donkin, vibes Jim Hart and drummer Joshua Blackmore who delivered a sterling performance. Neset showcased tunes form his album Pinball and a few tracks from his Cologne Philharmonic Hall show in 2016. The result was a perfect example of his skillful delivery that only improves with age and experience. Excellent interplay with each member of the band, especially Hart, blew the audience away and no doubt left a lasting impression. Friday also saw the debut of drummer Sebastian Rochford's New Project featuring Nicole Mitchell on flute and Neil Charles on double bass. Rochford said afterwards that the ideas and the music were developed while he was in India for a year. The show was thought provoking but, at times, difficult to follow.

On Saturday, the compelling and very listenable band, Phronesis, have enjoyed great success since their formation due, mainly, to superb albums like Parallax and The Bemouth performed. For this festival they were teamed up with The Engines Orchestra, conducted by Phil Meadows , at the Town Hall in a project called Decade Zero which was composed by Dave Maric and commissioned by the Cheltenham Jazz Festival, Manchester Jazz Festival and the EFG London Jazz Festival. Phronesis' tunes were woven into some of Maric's original music using loops, rhythms and textures to produce a spectacle, jam-packed with energy and positivity from the outset.

Another highlight on Saturday was rising piano star Elliot Galvin and his Trio, playing tunes from his album Punch, Logan Richardson playing music from his album Shift and master improvisers, The Necks. Also on Saturday's line-up was drummer, Steve Gadd. Those who saw it, heralded it as an exhibition of just how the drums should be played; a superb performance, but then again you would expect nothing less from one of the most sought-after musicians around.

It felt that, by the time Sunday had arrived, the festival was in full swing and this was the day that two big jazz stars were set to appear with some great supporting acts. Chick Corea and his trio with Eddie Gomez on bass and Brian Blade on drums showed why he has been at the top for so very long. Corea took the big top by storm, organising not one but TWO sing-a-longs and weaving in little gems like "500 Miles High," "Spain," and paying homage to Bill Evans with the song "Alice in Wonderland" and Thelonius Monk's "Work." Corea's standing ovation was greatly deserved, as is his icon status.

If Chris Potter is not considered one of the greatest saxophone players around today, his performance on the Sunday demonstrated exactly why he should be. Potter, backed by his quartet, (David Virelles on piano, Joe Martin on bass and Nasheet Waits on drums) played tunes from his latest offering The Dreamer is the Dream and made such complex music seem so simple. It was a masterclass in how to showcase the saxophone. Potter's support of young musicians is clearly evident with the young players in his band and the fact that he went from this gig, directly to guest with Snarky Puppy, performing in the Town Hall.

Sunday was not only about the headliners but also featured two rising acts. Schnellertollermeier, a band that mixes rock, punk and free improvised music, produced a show that was technical, not only in its delivery but also in the way their instruments were played. Luck was sadly not on their side as their equipment was mistakenly sent to Amsterdam and they had to use borrowed instruments. Difficult enough for some bands but even harder for a band that uses a technical and fine-tuned set-up. This major setback did not deter them or hinder their professionalism. Schnellertollermeier delivered a show full of energy and marked the band out as one to watch out for.

Another player whose credibility is on the rise is trumpeter Yazz Ahmed who, with her Family Hafla band, conveyed jazz infused with Bharani rhythms. To the untrained ear, the music appeared to be simple however, it was pretty complex: Ahmed took the audience on a journey that steadfastly held audience's attention. The show was ended with a number by These Young Puritans which was upbeat: a great end to the show. Yazz is a star on the trumpet and performances like this will only enhance her growing reputation.

The final day of the festival (Monday) has traditionally been a quieter day and the organisers realise this so the first act of the day tends to be very loud and full of dynamism. This year the task was given to the The Hot 8 Brass Band. Hot 8 had everyone on their feet within five minutes of taking to the stage and played a few tracks from their new album On The Spot like "8 Kickin It Live" as well a show favourite like the instantly recognisable "Sexual Healing" and "Keepin' It Funky." The band's show was loud and delivered at such a pace that it was hard not to enjoy both the music and the exciting interaction between band and audience.

The penultimate show at this year's festival was performed by British saxophonist Denys Baptiste who performed songs from his new album The Late Trane. The album features new interpretations of John Coltrane songs from the period after Love Supreme, his seminal album. These are lesser-known works and, at the time they were written, were the ones listeners had most difficulty with. Songs like "Living Space" and "Astral Trance" were played beautifully by Baptiste and his band Nikki Yeoh on piano and keyboards, Neil Charles on bass and Rod Youngs on drums. Baptiste, in his introduction to the concert, said that he hoped that, on hearing these pieces, the audience would seek out and invest in these fantastic albums.

The task of opening any festival and closing it is always a hard one as the organisers seek to start and finish with a bang. In my opinion, there is no better artist than Gregory Porter. For two hours he had people in the palm of his hand. Songs like "Musical Genocide," "Liquid Spirit," "Take Me To The Alley" and "Holding On" were flawlessly delivered by Porter and his band: Chip Crawford on piano, Emanuel Harold on drums, Jahmal Nichols on bass, Tivon Pennicott on saxophone, Ondrej Pivec on Hammond organ, Chris Storr on trumpet. The addition of Pivec has not only made the sound stronger but added another thrilling dimension. At present there is no stopping Porter and, based on this performance, who knows where it will lead? A vocalist who, in years to come, will be remembered as one of the all-time greats. A brilliant show to finish a wonderful festival.