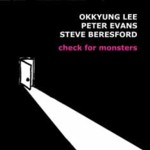 Although he works in other musical areas, New York-based trumpeter Peter Evans may be best known as an improviser from his solo album More is More (Psi, 2006), on which he demonstrated a range of techniques and a pair of lungs that drew comparisons with Evan Parker's own saxophone playing—comparisons that seem perfectly reasonable based on the music. Classically trained cellist Okkyung Lee organized this trio and their tour. In common with Beresford and Evans, she has an eclectic range of musical interests that extend way beyond improvisation.

Before this trio came together, the three possible pairs formed from its members had each collaborated, and this contact shows through in the players' reactions to each other. Throughout this recording, they display familiarity with each others' playing, reacting rapidly and appropriately. Across four improvisations—three of which are extended—the combination of cello, trumpet, and piano creates a surprisingly energetic soundscape. If the instrumentation creates an expectation that the music will be cool, with some chamber influences, then such expectations are unfulfilled. Instead the three players generate considerable volume and momentum, with each of them making an equal contribution; none of the three drives things along alone—they all do.

From a subdued start, the opener, "Phacthio," gradually builds up awesome energy, driven along by massive block chording from Beresford and arco lines from Lee that are often felt as much as heard, all overlaid with stuttering blowing from Evans in the upper register that repeatedly demands attention. The piece is improvised, so there is no sheet music for it. However, if there were sheet music, it would doubtless be headed "Allegro Con Brio". Exciting and richly rewarding.