Cheap Trick and Squeeze are both terribly underrated bands, and yet, they have a rabid and dedicated fan base. Though some consider them to be little more than purveyors of bubblegum pop, Cheap Trick could be called the inventors of modern power pop. The group's music combines the best of melodic rock, Beatlesque Brit-pop, humorous, eclectic lyrics, power chords, and new wave/punk, with a dash of heavy metal and arena rock. Guitarist/showman Rick Nielsen, lead singer Robin Zander, Tom Petersson—the master of the 12-string bass—and drummer Bun E. Carlos have been wowing audiences for 35 years.

Squeeze bridged the gap and provided the link between the pop-sensibilities of the classic British bands of the '60s and the modern rock/new wave/punk of the late '70s/early '80s. Squeeze's songs featured smart pop—edgy yet mainstream, literate and erudite lyrics with a decidedly British sense of self and humor, layered over well-crafted, catchy, hook-filled melodies. Hard though it may be to believe, Squeeze didn't have a U.S. Top 40 (Billboard Hot 100) hit until 1987, with "Hourglass" (the group's best-known song, "Tempted" stalled at #49 in 1981). Squeeze bridged the gap between Britpop and modern rock/new wave indie rock. 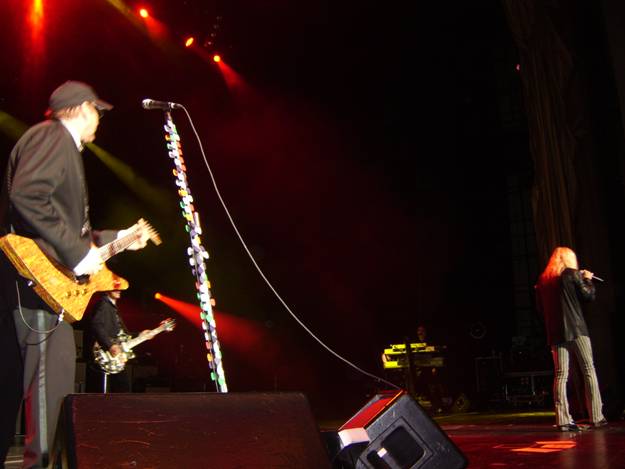 Cheap Trick opened the show (the bands are co-headlining on the tour, alternating nightly) with "Way of the World." When Robin Zander approached the microphone it was apparent that not only does he still look and act like a rock star, but he still has the amazing voice to go with it. The show was electric, with Rick Nielsen covering more ground than an NFL wide receiver as he raced around the stage, playing killer lead guitar, all the while tossing hundreds of guitar picks into the audience. Bassist Tom Petersson and Nielsen's son Daxx on drums (subbing for Bun E. Carlos) formed a ferocious rhythm section. The audience of baby boomers—many of whom brought their sons and daughters—sang along from the outset. Dancing was reserved for the biggest of their hits: "Surrender," which ended the main show, and "Dream Police," the encore.

In addition to "Way Of The World," Cheap Trick's set featured sixteen other classics and fan faves. As expected, the band's set also included: "I Want You to Want Me," "Need Your Love," "Heaven Tonight" and "Good Night" (on which Nielsen broke out the huge five-necked guitar). In between, the band steamrolled through "These Days," "Baby Loves to Rock," from All Shook Up (Epic, 1980), "Sick Man of Europe," "I Can't Take It," a nugget taken from Next Position Please (Epic, 1983), "The Ballad Of TV Violence(I'm Not The Only Boy)" and "Closer—The Ballad of Burt and Linda," from The Latest (Cheap Trick International, 2009). The crowd, which was already in a frenzy, went wild when Zander sang "Borderline," also from Next Position Please, "Come On, Come On" which originally appeared on the group's second album, 1977's In Color (Epic) and a superb cover of The Beatles' "Magical Mystery Tour."

Cheap Trick shows are as much about the music as they are about the showmanship and the band's collective sense of humor and the absurd. The music was fantastic. Zander, Nielsen and Petersson, as always, put on quite a show. And the sense of the absurd as well as the humor? Nelsen quipped to the audience that Zander was his "favorite vocalist in the world," and later thanked "everyone for making our last album the number one eight-track in the world for the past seven months"—the joke is that it is available on eight-track as well as CD, download and LP. 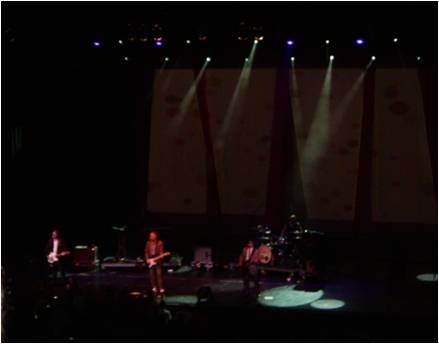 After a short intermission, Squeeze took the stage. Even after 35 years Glenn Tilbrook has one of the most distinctive sweet and melodious voices in music. The crowd was immediately on its feet and completely into the performance from the first notes of the evening's opening tune "Black Coffee in Bed," as evidenced by its singing of "hardly contain," "joy and the pain," "fire in my eyes" and "new love tonight," the phrases that end each verse. Before the cheers could die down, the unique and instantly recognizable synthesizer opening, followed by the military cadence of "Take Me I'm Yours," reverberated throughout the theater. The tune, which featured vocals by both Difford and Tilbrook, caused members of the audience to jump to their feet and start dancing.

This latest version of Squeeze—featuring Difford on rhythm guitar and vocals, Tilbrook on lead guitar and lead vocals, almost original bassist John Bentley, Lord Stephen Large on keyboards and Simon Hanson on drums—roared through a greatest hits set that included "Goodbye Girl," "Cool for Cats" (on which Tilbrook improvised a few riffs from "Dance To The Music" while Difford supplied the lead vocals), the 1950s-influenced rockabilly rave-up, "Annie Get Your Gun," "If It's Love," "Goodbye Girl, "Hourglass" and "Up the Junction." All the while, the audience was working up a sweat singing and dancing along. But that wasn't all. Squeeze also got funky and a bit kinky with "Slap and Tickle," from its debut U.K. Squeeze (A&M, 1978). The group also thrilled long-time fans by including rarities "It's So Dirty," "Hope Fell Down" and the ballad, "When the Hangover Strikes." And, of course, what Squeeze show would be complete without "Tempted" which they saved for last, then thanked the crowd and left the stage. After about 30 seconds they bound back on the stage and encored with Pulling Mussels (From the Shell)" from Argybargy (A&M, 1980).

Cheap Trick and Squeeze is another pairing that doesn't quite sound like a match that should immediately come to mind when pairing '80s icons. But it should. Both bands played as if their lives depended upon it, giving it their all. They played driving power pop with strong melodies, and were both heavily influenced by The Beatles. Their fans are rabid and, in many cases, like both bands. Though it doesn't at first appear to be the case, they truly are a match made in heaven.