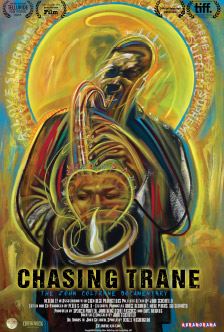 Because it is poised to contribute to the image of John Coltrane in popular culture for years to come, a thoughtful appraisal of this film is very important. Promoted at major film festivals and released to theaters worldwide, Chasing Trane: The John Coltrane Documentary, directed by John Scheifeld (noted for The U.S. vs. Lennon (Liongate, 2006)—and other films about iconic cultural figures and entertainers), the film wants to tell the world who Trane really was. In many respects, Coltrane has become the most heroic figure of modern jazz, a legend beyond legends, and virtually a mystical figure for our time. We need to have a full and accurate picture of him in our minds, especially when we listen to his music and, more broadly, recall the tumultuous era in which he lived. Does this film accomplish this aim?

This is the latest of several recent theatrical releases about mid-twentieth century jazz icons. Unflinching documentaries about saxophonist Frank Morgan and trumpeter Lee Morgan (no relation to one another) and romanticized biopics about Chet Baker and Miles Davis have emphasized their tragic addictions and troubled lives amid their career highlights and evocations of their musical genius. Chasing Trane portrays Coltrane's transcendent recovery from addiction that led him to lead an exemplary life while he evolved, in a few short years, from just another talented saxophonist to a creative force whose greatness has been compared by some even to Beethoven. In this sense the film is hagiography more than it is a hard-nosed well-researched revelation of truth. As the elder last surviving musicians who came up in the 1950s pass on, Chasing Trane suggests the possibility of a jazz version of Tom Brokaw's praise for WWII veterans, The Greatest Generation.

The wonder of this film is its powerful evocation of the birth to death trajectory of Coltrane, from his birth in Hamiet, North Carolina, to his exposure to African American preachers whose rousing sermons were to shape his own musical voice, to his interest in the saxophone. Then, moving with his family to Philadelphia, he is befriended by a young Benny Golson, who recalls their mind-blowing experience of hearing Charlie Parker and Dizzy Gillespie at the Academy of Music. In quick succession, we also learn of Trane's membership in the Navy Band in Hawaii (of which one recording of him survives), playing with various big bands, acquiring the Johnny Hodges sound, hooking up with Miles Davis in New York, and being part of the first great Miles Davis Quintet. Tasting great success, his strivings are undermined by heroin addiction. Fired by Davis, Coltrane goes through drug withdrawal in his home in North Philadelphia and has a life changing spiritual awakening. Then, in the less than ten years before his untimely death from liver cancer, he becomes an unparalleled creative force in jazz, evolving from hard bop to the exquisite inventive teamwork of the John Coltrane Quartet, and finally fearlessly pursuing his own version of the avant-garde. We also learn about his marriages and family life as well as his world travels.

As is often the case with documentaries, interviews are the focal points of the film and in this case are beautifully done. President Bill Clinton, himself a saxophonist (remember that?) shares his appreciation of Coltrane. The film makers put the interviewees at ease, and what they say is well-articulated and, of course, heaping praise on Trane. (Coltrane, a man who exemplified humility, might have balked at such flattery.) Musical assessments are provided by Wynton Marsalis, critic Ben Ratliff, Coltrane biographers Ashley Kahn and Lewis Porter, "Doors" rock star John Denmore, and a younger musician, Kamasi Washington, the latter two of whom were influenced by Trane's playing and composing. Sonny Rollins, once a close friend and kindred spirit, remembers how he bonded with Coltrane. Daughter Michelle, son Oran, and great musician son Ravi Coltrane recall Trane's marriages to Naima and Alice, accompanied by home movies that show Coltrane in candid and relaxed moments with his families.

The most stirring of the interviews are those with Golson, Jimmy Heath, and Carlos Santana, all of whom are moved to tears by their recollections. Santana attributes his own personal healing to Coltrane's A Love Supreme, and at one point Heath lovingly sings an excerpt from a Coltrane tune that gives goosebumps. The historical film footage is moving, especially that accompanying Coltrane's song "Alabama" composed in response to the Birmingham massacre of four black girls at the Sixteenth Street Baptist Church; and his pilgrimage to Nagasaki to pray for the Atomic Bomb victims and perhaps for all mankind. All in all, whether you consider him a saint or not, Coltrane is remembered by everyone as a gentle, loving man who sought transformational power through his music. Kudos to Mr. Scheifeld for an intimate, moving portrayal of Trane and those around him.

If the film has shortcomings, two of them will be apparent to musicologists and biographers in particular: 1) Chasing Trane makes very little attempt to elucidate Trane's specific musical contributions, and 2) it falls short in bringing anything new to light about "the real John Coltrane," the deeper psychology of his personality. Even with the presence of Lewis Porter, whose musical analyses of Coltrane are state of the art, little or nothing is said of what Trane learned about composing and theory from Dennis Sandole, not to mention George Russell, Eric Dolphy, Sun Ra, Ornette Coleman, and others. The innovations of the "Coltrane changes," the incredible impact of Giant Steps (Atlantic, 1960), and the fact that Trane's endless practicing on his instruments was not only about perfecting his playing but about finding ever-new ways of improvising—these and other aspects of his music are relegated to the periphery. Scheinfeld is quoted as saying. "I didn't want to make a jazz film... This is a journey film ... it's a portrait of this remarkable artist." In that respect, Scheinfeld must have been blind and deaf to the fact that Coltrane repeatedly said (and it's spoken in the film by Denzel Washington, whose "voice of Coltrane" is appropriately plain and simple) that music itself was his life and spirit. A story about Coltrane without musical analysis is like a biography of Einstein without a discussion of the theory of relativity.

Regarding Coltrane the person, the film's portrayal of him is probably accurate, as far as it goes, but it falls short of genuine insight. Scholar and historian Cornell West excitedly spouts platitudes rather than connecting Coltrane, for example, to W.E.B. Dubois or noting that Trane may have anticipated in his life some of the ideals of the African American Million Man March. And the film glosses over the fact that Coltrane's spiritual awakening during drug withdrawal was not just an act of repentance, reform, or religious conversion. In Coltrane's case, he not only found a "higher power;" he discovered his true identity and purpose. His awakening followed the "birth of the hero" paradigm articulated by Joseph Campbell. In Jungian terms, Coltrane individuated. He became a determined personal force in his music, leaving the crowd behind and undergoing a searching creative evolution. His music explored both the light and the darkness within, the full range of human emotions. While in his daily life, he was a gentle, soft-spoken person, in his music, he was as much like Dante as he was like St. Francis of Assisi. Coltrane's uncanny ability to penetrate the depths of the soul is missed by those with a superficial acquaintance with his music.

All told, Chasing Trane perpetuates a myth, and lodges that myth in popular consciousness. It is a good myth. We all need our unsullied heroes. But if you want to know the truth about John Coltrane, listen to his recordings. Listen to them over and over again. Then you will know who he really was and who you really might be.