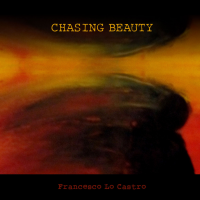 Positive energy flows and pleasing melodies abound in Chasing Beauty by guitarist and composer Francesco Lo Castro, the fifth album released on his own label. Using an array of outstanding musicians, voice and instrumentation, Lo Castro creates a sonic canvass that's reminiscent of artists Pat Metheny and Mike Stern. Throughout the disc, Lo Castro displays an innate skill and sensibility in relation to his supporting musicians, instinctively knowing when to hold back and also when to unleash their joyful vigor.

The opening track "Dresdin" sets the aura of the entire album, creating an atmospheric quality and keen sense of dynamics that is maintained throughout. Lo Castro's guitar is subtle and delicate at times, and interweaves with the rhythms and soundscapes laid down by his instrumentalists, building to majestic crescendos, then pulling back at just the right time. The rhythmic and syncopated "Sahara" is a captivating track, complete with congas, delivering a melody that immediately hooks the listener. The song is optimistic, with Lo Castro's deft use of atmospheric guitar effects, leaving plenty room for guitar and flute solos soaring over the headwinds of the driving beat. With "Love," Lo Castro displays a subtle and introspective elegance, featuring horns played by Fulvio Sigurta.

Many of the songs feature the beautiful voice of Noa Bodner, adding an alluring and haunting backdrop to Lo Castro's memorable melodies. In "Embrace," her gentle harmonies lead into Lo Castro's melodious leads, almost like a call and response. The following track, "Dark Smiles," is the centerpiece of the entire album. Bodner captivates the listener with a hypnotic and repetitive melody, as Lo Castro's guitar solo sends the track into a wonderful crescendo and release, only to be drawn back again by Bodner's voice. Perhaps the only criticism of this piece is that it leaves the listener wishing it didn't end so quickly.

Other notable tracks on the disc include the gentle swing of "Bunch of Houses and Wonderful Memories," as well as "Nino and Dunia," featuring an easy-going yet intricate interplay between Lo Castro on guitar and Joe Fowler on flute.

Dresden; Father; Sahara; As It Is; Love; May 2011; If I; Embrace; Dark Smiles; Bunch of Houses and Wonderful Memories; Nino and Dunia; Peter Pan.