"In the music business, you have to make yourself as diverse as possible in order to keep your artistry going," he notes, so he continues to do work as a sideman with people like guitarist Jordan, and another guitarist Jana Herzen. "I'm modifying my sideman work, with the exception of people I want to work with, that I find musically interesting. If you look at my resume, there are so many great artists that I've already had the honor to work with and learn from. I have to start saving a little time for myself so I can share some of my own compositional ideas with today's music world. ... I'm enjoying it. It's always great to play with many different people in different settings, and continuing to enjoy the great gift of music."

With music all around his family, Moffett seems to have had little choice, but he's grateful for his life and music and has happily passed the gift on to his own children. He said growing up in the family band "had its pros and cons, like everything in life. But the positives certainly outweigh the negative. When I look back now, I realize I've actually been on the road 26 years straight. That's all I've been doing is learning music and performing it. But it's my music that I'm sharing or someone else's vision that I'm helping to build, or being a part of," he notes. "It's been a great run. I'm thankful to still be in the music business after so long and to look at it with a new understanding, a new vision, a rejuvenation. We got through ups and downs in life, and there's always another door that opens to allow you a light to transcend where you've been. That's part of life as a whole. ... As a parent, I've been able to communicate that to my own family. It's great, it really is. It's part of the life chain of having food or oxygen, the way that we feed our soul in order to keep going."

He took up the bass because the family band needed a bassist. "When I started in the Moffett Family Band I was playing trumpet. ... We had had another bassist at that time by the name of Patrick McCarthy, who was actually the principal bassist with the Oakland Symphony, who gave me some training as a youngster of seven or eight. Eight years later, I'm at Juilliard School of Music studying with Homer Mensch, and about six months after that, I'm on the road with Wynton Marsalis and I haven't looked back since. I've been on the road full-time since that period."

Like most budding musicians, he was influenced by many of the great players. He cites Stanley Clarke, Ron Carter and Pastorius as his primary influences, but adds "I'm into so many different bass players for different reasons. Ray Brown, Percy Heath, Larry Graham, James Jamerson who played on all those classic records for Motown. Paul Chambers, Scott LaFaro. They're all incredible players. It's not just one guy."

As for other influences, his father, an educator as well as a drummer, is key to his development. "I would say learning to play music from a philosophy my old man taught us—which is freedom with discipline concept: the freedom to create the idea that you want, the discipline to have the technique to execute the idea—that's a nice way to learn how to play because it was based on having no limitations. Philosophically speaking, that's how I got interested in so many different kinds of music. [At home] one minute Bach would be playing, and the next minute Earth, Wind & Fire, and the next minute John Phillip Sousa would be playing in the house, because my dad was a music educator. The style of music never stayed in one arena."

After touring with his family, Moffett attended Fiorello H. La Guardia High School for the Music and Arts, in New York City, before eventually ending up at Juilliard. In 1983, he played on Branford Marsalis' debut as a leader, Scenes in the City (Columbia, 1984), and the following year he joined the Wynton Marsalis quintet, appearing on 1985's acclaimed Black Codes From the Underground (Columbia). He played with legendary drummer Tony Williams, and in 1987 signed with Blue Note Records and debuted as a leader that year with Beauty Within. He's been recording ever since and had a highly successful recording career.

He took something positive away from each musical giant with whom he was associated. From Coleman, "I've learned not to discriminate against sound. That's what the Sound Grammar is about, which is the evolution of harmolodic music. Someone like Ornette Coleman has spent 50 years doing this and is still evolving, so how can I possibly not keep an open mind for change and progress?"

About Williams, Moffett says the drum wizard "was phenomenal. What I learned from Tony was about energy and how to move space—the power of it. ... I spent about two-and-a-half years with Mr. Williams, who was a complete innovator on his instrument. It was an incredible joy. He was on fire every night: completely creative, very rarely would be repetitive—only in the sense of the theme. An extraordinary musician as well as a person. It's unfortunate that a lot of the drummers I play with today didn't get a chance to see him perform live. They have the records, but it was nothing like seeing him live. It was completely amazing.

"I remember we did a tour where we did 29 concerts in 31 days. I never forgot that tour. Every night he played something great that was unique and different. I was, like, 'Wow.' [chuckles] He was a huge inspiration. Also, he was a great composer. Rhythm section players who have an opportunity to express their voice from a compositional standpoint, that's really an extra perk. It's so rare that those things can happen. Of course, Charles Mingus set the standard for that ... to not just deal with the instrument, but the whole story, the song as a whole.

Thinking of Tyner, he notes, "I just saw him in Tokyo. He never sounded better. ... McCoy is in a class by himself in that he's very patient. He lets things build and happen naturally. He would talk about being able to have the flexibility to go with something, even if it's in a structured form, so that the music is always being represented on the highest level. Sometimes you have to play a little less to get the most out of something. That is a great way to continue to apply balance to something that could be complicated at times. It was a heck of an institution to be a part of, as well as playing with people like Art Blakey. I don't think a lot of people of my generation—I'm 42—have had an opportunity to have experienced some of those different schools of jazz music and incorporate the complexities with simplicity. Balance is a good thing, like day and night." 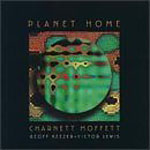 Moffett notes that "when you put all these concepts and philosophies together, everyone has similarities, and yet they all are unique in their own way"

"I think jazz is a great way for people to expand their possibilities of what can be done musically, because it incorporates so many different styles of music. ... It never stops. Every day we have life and we get up living. There's always something to keep reaching for. Just when you think you've gotten this done or figured this out, here comes along another idea and more information and it keeps on going. It's like a fountain with a flow of energy that is constant," says Moffett. "That's why people like Hank Jones and Ravi Shankar and Ornette Coleman can still be on the road making music for people at their age, because not only are they sharing a sound and a concept of music that brings joy and healing to others, but they're also refreshing their own bodies and souls as well, regardless of the style of music that they're playing. Music is a life force that keeps the energy moving in the universe." 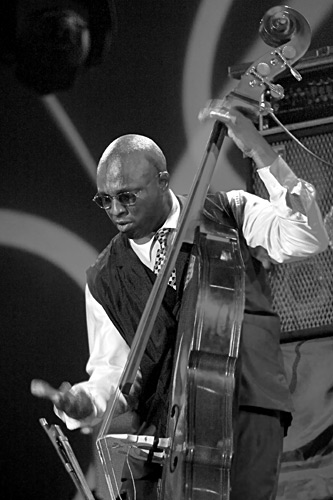 At 42, Moffett has miles to go before he sleeps, and he's happy to be in such a creative field, sharing the gift of music with others. "It has been my entire life. It is a wonderful blessing to be a musician and to appreciate the ability that music has to bring people together, even if it is for a short period of time. I think it makes significant changes in the way that it can make people feel better day to day. It's a positive to be able to give people a good feeling through music, regardless of what the style may be. People like music for different reasons and use music for many different reasons. To each his own. However, as an artist I just want to be true to my own identity and keep myself settled in a way that I honestly give in a creative way, with inspiration. Not as: 'Oh, what am I going to do now,' but with the attitude of: 'I'm looking forward to doing this now.' It all depends on what your objectives are in order to share the information."