By R.J. DELUKE
December 7, 2009
Sign in to view read count
"I enjoy all of the music, just as I enjoy different aspects of color in paintings, or different people, or different types of food, or things of that nature. For me, it seems to be a more interesting way of life to have an appreciation for all that is offered on the planet."

With that simple statement, bassist Charnett Moffett says a lot about his career in music that began as young a child, and was pretty much inevitable from the moment he appeared on the planet in 1967, as the son of drummer Charles Moffett. He started playing drums at age two, and then investigated the trumpet before he eventually found his hands around an upright bass, performing with the Moffett Family Band, led by his dad, that included brother Cody Moffett (Cody) also on drums, brother Mondre on trumpet and brother Charles, Jr. on sax. Bass chores were handled by Patrick McCarthy and young Charnett on a half-sized bass.

He toured Japan at the age of seven with the family band and roughly a decade later was in the employ of Wynton Marsalis. He's since spent years playing all kinds of improvised music, moving from the mainstream lodgings of Marsalis to under the aegis of the free-spirited Ornette Coleman. He's recorded over the years with the likes of McCoy Tyner, Herbie Hancock, Tony Williams, Stanley Jordan, Pharoah Sanders, Wallace Roney and Joshua Redman. Though improvisational is at the base of his musical explorations, his music influences and tastes are broad. That can be seen in his albums, from his 1987 debut on Blue Note records, Beauty Within, right up to his current recording, The Art of Improvisation (Motema, 2009), his tenth as a leader.

"It's just about being honest with yourself," says Moffett. "I've been saying the same thing for years now. I haven't changed my philosophy much, but the music keeps changing based on the creative idea that I wish to share with my audience."

"The Art of Improvisation is an album inspired by my improvisational experiences in the last 26 years. I wanted to bring improvisation to the forefront of the album. We have found that's where the artist can be most expressive and also have others to share their ideas freely as well," says Moffett. It has Eastern influences throughout, most obviously the duet, "Call for Peace," with duet Tibetan vocalist Yun Chen Lhamo. But there are also other traces of it in the album.

"The interesting thing about being a musician is realizing that if you look for the simplicity and the connection of sound and notes ... there's really not that much difference. There's only 12 notes in the diatonic system. I wanted to figure out how many different ways I could connect sounds from the West with the East and everything in between there, and doing it in an improvisational way from the root of jazz. Jazz music is so expressive that it allows you all these possibilities to play any way you really wish to if you set up a formula that has these rules that are engaged."

Moffett plays upright bass, fretless electric bass guitar and piccolo bass, and does so with a combination of musicians including drummers Will Calhoun and Eric McPherson, keyboardist Scott Brown, guitarists Pat Jones and Steve Barnes and trumpeter Robert Joseph Avalon. Angela Moffett recites the words of poet Langston Hughes on "Dreams." His son, Charnett Max Moffett, is showcased on "Swing Rock" and a few other tunes, notably the Jimi Hendrix-inspired interpretation of "The Star Spangled Banner."

The tunes are largely split among trios, duets and solo bass playing. But "Dreams" is a dynamic large group effort, a free-form piece influenced by his association with Ornette Coleman. (His father was Coleman's drummer for a time, and Charnett's name comes from a hybrid of his father's first name, Charles, and Ornette.) 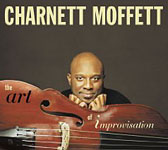 Says Moffett, "The names came to me naturally. It wasn't any theme more than that. But it's nice to have dreams. It's nice to live in America. And it's nice to see other aspects and cultures of the world and appreciate their value, gifts and contribution to society as well.

"I played with Ornette for nine years. It was an incredible experience. It was before I played with McCoy Tyner for almost seven years. Then I went back and played with Ornette for another year. After leaving Ornette to promote my own music, it was kind of full circle for me. It reminded me of how I started music with the Moffett Family Band. Playing with my dad, my brothers, two drummers. 'Dreams' does have two drummers: Max Moffett my son, and Eric McPherson. The message about 'Dreams' was inspired by being an American, which I am glad to say. That's also the whole inspiration behind 'The Star Spangled Banner,' besides being a big fan of Jimi Hendrix, and finding those influences between someone like that and Ravi Shankar, for example. It's really all connected. 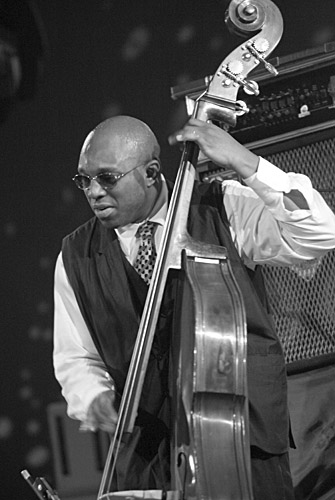 "When you look at a festival like Woodstock, you had an artist like Ravi Shankar and Jimi Hendrix playing the same festival, with two totally different styles of music, yet using the same notes. I wanted to implement those possibilities on The Art of Improvisation from the root of jazz, which allows you to have many possibilities ... incorporating different sounds and creative expressions together so that everyone's dream can be fulfilled."

"I'm searching for even more sounds, which is why I'm constantly keeping an open mind to what exists in our world today," he says. "For me, it's quite natural. I'm from New York City. I grew up in the Bay Area [California] and finished school here in New York, before finishing up at Juilliard and going out on the road with Wynton Marsalis 25 years ago. So when you grow up in a diverse environment like that, you're really not thinking in a one-dimensional form. You're simply being yourself and enjoying all of the cultures that are offered. For me, the colors represent different concepts, philosophies and cultures based on what you have experienced or what you've been introduced to."

"I used to play trumpet before I started playing bass," he adds. "So when I'm playing my piccolo bass, I'm thinking more like a horn player or guitarist, conceptually, which is something people would not normally get a chance to hear me do playing my double bass in the traditional role. So it's nice to be able to tell and share another side of the story that is also me. The same way with the fretless bass, which I've been doing for quite a while now—for as long as I've been playing the upright bass."

He adds, "Each instrument has its own way that it's built scientifically to get notes that sing out more. The bass is predominantly the supportive instrument, however it can be used in other capacities, if you can figure out the right science to introduce it and make it heard, without force. There are other ways. You can use wah-wah pedals to give it more color."

WithThe Art of Improvisation "it was time for me to trust in my natural way of thinking and keep going with some of the concepts I had already established back when I made albums like Planet Home (Evidence Music, 2003)."

But Moffett, while playing gigs to support the 2009 CD, is already off to other things and has another CD set for release in April 2010. "I've just finished recording Treasure (Motema), an extension of what we did on AOI [Art of Improvisation]. There's more focus on the melodies of the tunes and still incorporating the improvisation as well," says Moffett. "Each time I do a project or make an album, it's a process that I'm building as the music is constantly evolving."

His son Max Moffett and daughter Amareia Moffett will be among the 13 special guests on the album. Others include Stanley Jordan and Denardo Coleman. "It's somewhat of a family affair with Moffett family members, of course. Stanley Jordan and Denardo Coleman, who I've known all my life. Young, great players. Trumpet, bass clarinet and sax. A harpist and guitarist. So it does have that Eastern influence as well as the Western sounds that are connected in a jazzy, melodic improvisational way. There are different types of grooves and sounds. It's a very interesting album."

And since the recent completion of that album, Moffett has already been busy writing new music. "It's not something that you plan. It just comes to you," says the bassist. "It's a special thing that happens with artists, which is why we do what we do for a living. You can't plan when an idea is going to hit you. There are ways you can go about it. You can say, 'Ok. I'm going to write a tune today,' and you can sit down and technically make yourself write a composition. But there's nothing like going to the grocery store and a melody pops into your head and it just happens spontaneously. Or you can be watching TV or reading a book (when inspiration strikes). I don't have any one way that I compose music. It also depends on what I want to say and the importance of the message that I'm sharing with the audience, emotionally. Because, after all, when we're listening to music, we're getting some kind of emotional or intellectual fulfillment, or spiritual, from the sound we're hearing."

"Music is like oxygen, in a lot of ways. It provides life. It's a life force. I think the world would be a pretty dim place without the sound of music," he says. "I don't have any one particular format how composition happens. There have been times where I know there is a record date coming up and I have to prepare for an album. But even within that, you kind of let it happen and not have anything be contrived, so that when you're playing a concert or people are buying your music and hearing it, they know that they're feeling with you or, at that moment in space and time, are as close as possible to the original creation of the idea."

Composition has always been important to Moffett as a way to express himself beyond the notes that come flying out of his bass. "On the albums I have recorded up until now, I've always composed all of the music. I'm starting to feel more comfortable expressing my musical vision and sharing it with the different communities of the music world. I'm pleased to do that. It's nice to be a bassist, but interesting being a composer and settling into another aspect of my career at this point," he says.