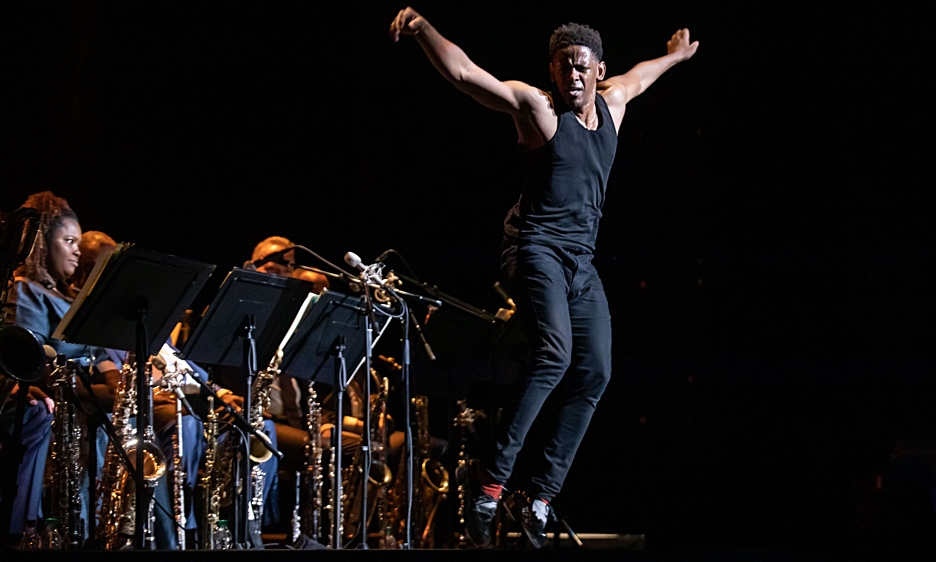 That festival managed to survive the pullout of a major sponsor and a change of venue. But 1994 saw a move to the nearby Carowinds amusement park grounds and an admission charge, a blow from which the festival never recovered. When the idea was resurrected in 2015 by Blumenthal Performing Arts they grew the festival gradually, incorporating a mix of free and paid admission concerts. The whole idea was suggested by trumpeter Wynton Marsalis, who has been involved as a performer all along. It's a model similar to the one followed by the Montréal International Jazz Festival, although on a smaller scale.

Charlotte guitarist Calvin Edwards kicked off the festival's Lunch Hour Jazz Performances series, free outdoor shows from local and regional acts at the Jazz Pavilion at Levine Center for the Arts downtown, with his organ trio (although the festival labelled the first paid concert as the kickoff concert). The Pavilion is an outdoor stage with a tent surrounding the stage and a tent roof providing the audience protection from sun and rain— although it was not sufficient for the torrential thunderstorm on Saturday (more on that later). This is a classic soul jazz trio, but with a modern touch: think George Benson (or possibly Norman Brown), rather than Jimmy Smith. Edwards has the Benson bit of scatting with his guitar down, and his wireless connection to his guitar amp gave him the freedom to walk freely around the stage and into the audience.

Like Benson in his early days, he sings only part of the time. He sang "The Nearness of You" in traditional standard style, although they went up-tempo for the guitar solo. "Over The Rainbow" (from the movie The Wizard of Oz) continued the standards. But the funk tune "It's A Shame" (from The Spinners) brought things back into more contemporary stylistic territory, with significant contributions from organist Samuel Obie and drummer Fred Dunlap. The set concluded with a vocal version of Brook Benton's "Rainy Night In Georgia," a song that connected with everyone in the audience, jazz fans or not.

Airstream is a fusion jazz band based in Charlotte that has been active since 2006. Currently made up of guitarist/composer Andre Ferreri, keyboardist/composer Mark Stallings, electric bassist Dave Vergato, and drummer Alfred Sergel IV, their music recalls models like Weather Report and Pat Metheny. But it's a kinder, gentler version of fusion: core soloist Ferreri is currently playing a semi-hollow guitar with no electronic effects, so the sound is somewhat closer to mainstream jazz than the classic models. Stallings contributed a tune with a lovely unaccompanied piano introduction, as well as a lyrical fretless bass solo from Vergato.

"Intercontinental" featured an 11/8 riff, and a drum solo by Sergel in call-and-response with the band. Ferreri joked that the audience didn't know about the time signature, but neither did the band. Maybe they'd play it better next time! They played the title tune from their most recent album Relatively Speaking (Laser Records, 2018), as well as "First Impressions." Another original, "Velvet Flowers" featured a bridge with a hard Latin groove and a grooving solo from bassist Vergato. The band played one cover for contrast: Horace Silver's funky "The Jody Grind" (the title tune of Silver's 1966 Blue Note Records album).

Pianist/vocalist Ariel Pocock and her quartet mainly focused on American standard songs. The languid, bluesy swing of "You Won't Be Satisfied (Until You Break My Heart)" featured her vocals. The song has a long history, having been introduced by Doris Day, then covered by Ella Fitzgerald and Louis Armstrong, Nat "King" Cole, and others. "My Shining Hour" found her at the center of the stage, singing a duet with featured guitarist Keith Ganz, which included a scat duel between guitar and voice. Cole Porter's "So In Love" was recorded on her album Living In Twilight (Justin Time Records, 2017), and returned to full band format.

Her version of Willie Nelson's "Crazy" began with a free rubato trio opening (with Ganz, double bassist Paul Creel and drummer Kobie Watkins, who led his own band later in the festival). Pocock initially overlaid her vocals, a remarkable display of grace under pressure. The band finally slid into a clear song form at the bridge. "Come What May" was given a Latin arrangement, featuring an extended (very fast) piano solo, a convincing shift in focus from the leader. It also included guitar and double bass solos. Pocock's original "Will I Ever Be In Love Again" was a ballad with deliberate nods towards The Great American Songbook. "I Thought About You" found Pocock strictly on vocals again, accompanied by the trio. The group played a swinging instrumental blues to close. There would be more from Pocock as pianist later in the festival.

Saxophonist/vocalist Camille Thurman was named a Rising Star by DownBeat Magazine. She considers trumpeter/Jazz at Lincoln Center director Wynton Marsalis to be her mentor, so it was not surprising to hear a program with a mainstream jazz bent. But the first tune was an original: "Origins" was fast bebop, with Thurman's tenor saxophone the main focus. Her playing has a warm tone, reminiscent of someone like bebop player Dexter Gordon, with even a hint of Swing era players like Coleman Hawkins. The standard "My Heart Belongs To Daddy" was played upbeat, with a Latin feel, and included a fine unaccompanied double bass introduction from Devin Starks.

Thurman recently began a project revisiting composer/pianist Horace Silver's trio of vocal albums for Blue Note Records collectively titled The United States of Mind (1970-72). Her first vocal of the concert was "Love Vibrations," immediately establishing her voice as a more powerful emotional instrument than her saxophone (despite her considerable saxophone technique). There was another lyrical double bass solo as well. "Forever Is a Long Long Time" was introduced by trio leader Darrell Green's unaccompanied drumming with mallets. Thurman introduced her original "In Due Time" as a conscious blending of Brazilian music and bebop. After a vocalise introduction with only drum accompaniment the theme was indeed an intricate bebop samba. Here as elsewhere pianist Keith Brown shone as both accompanist and soloist.

Guest trumpeter Wynton Marsalis was introduced, and the band launched into an up-tempo Latin arrangement of saxophonist Sam Rivers' beautiful "Beatrice." Marsalis' playing was impeccable, as it was for the rest of the set. The standard "September In The Rain" was another vocal feature, with Marsalis contributing a muted trumpet solo. The standard "The Nearness of You" began with the infrequently-performed verse, unaccompanied, and benefited from another muted trumpet solo. "Bye Bye Blackbird" was another vocal, very fast! The performance included scatting, and call and response with the trumpet. An exciting end to the set, with sung goodbyes and player credits.

This concert was the first in the Jazz Garden Tent at Romare Bearden Park, a unique venue with amenities far beyond the usual tent (chandeliers, for example). The official festival program called it the kick off event, as it was the first of the formal ticketed concerts.

South African vocalist/multi instrumentalist Laura Reed (now based in North Carolina, and also active in Nashville) played the first show of the Jazz at the Pavilion series, a series of evening free concerts. Her style draws freely from rock, funk, blues and jazz, and she's a firecracker. Her backing band was making its first appearance in this configuration, but sounded like they had been together forever. "Silver Lining" was a funk-pop tune, but with the unusual addition of Reed's ukulele. "Wake Up" was propelled by a Motown beat, but her homage to Billie Holiday on "Fine And Mellow" stayed in traditional territory (with the modern touch of Reed walking through the audience with a wireless microphone).

Reed picked up an acoustic guitar for the original bossa nova from her album The Awakening (Five Foot Giant, 2014), followed by the vibrant 70s funk of her single "Shine." The arrangement of the Gershwin standard "Summertime" got a funk backbeat, while "Struggle" (also from the album) was a rousing Gospel anthem. The final number was an homage to the Alan Lomax field recording that was Reed's introduction to the blues. She picked up a harmonica, then quickly switched to another in the correct key, joking "they all look the same." She and the band launched into "Lord I Just Can't Keep From Crying." Reed was just as convincing as blues harp player as she had been singing in all of the previous styles. The entire set was a terrific demonstration of passion and energy.

Back to the Jazz Garden Tent for a night of hot salsa with conguero Gino Castillo (based in Charleston, South Carolina) and his band, a sextet with two tenor saxophonists (Eric Schoor & Michael Quinn) , piano (Venezuelan Abdiel Iriarte, also musical director), bass guitar (Jake Holwegner), timbales/percussion (Matthew Kilby) and the leader on congas. The group has a weekly residency in Charleston. The set began with a definite nod towards having two tenor players at a jazz festival: "Tenor Madness," Sonny Rollins' famous duel with John Coltrane. Castillo announced that there was space in front of the stage for dancing, and the band was accompanied by La Quinn Mims (a salsa dancer/instructor from Houston, Texas) who was soon were out in the audience recruiting partners.

Cuban songs constituted most of the remainder of the set, vocals with several band members singing the coro call and response backup. The first was a mambo, followed by an arrangement of another well-known song. Castillo said that every Cuban music show was bound to include a version of "Guantanamera." After 40 years of playing it, the band decided to combine it with a cha-cha, resulting in "Chanchanamera." Not just a novelty, the arrangement presented a truly novel view of the standard, with the original song clearly recognizable. The Bill Withers song "Just The Two Of Us" featured both saxophonists in different roles: Michael Quinn on vocals and shekere, and Eric Schoor playing flute.

About Jazz at Lincoln Center Orchestra