True, Blue Note and Rouse were riding a wave that someone else created. But they also made it their own. 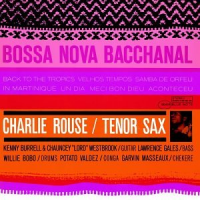 What a happy record! And what a delightful change from the usual 1960s Blue Note formula.

You know the drill. In the 1960s, Blue Note was the go-to label for two kinds of jazz: hard bop and soul-jazz. But Blue Note was never the reigning bossa nova label. When the Brazilian phenomenon swept the jazz world in the early 1960s, Verve was the capital of bossa nova, and Stan Getz was its main disciple.

So it must have seemed a trifle disingenuous—a little bit opportunistic—for Blue Note and Charlie Rouse to make a bossa nova album in 1962.

Earlier that year, Stan Getz and Charlie Byrd practically created the category with their monster album Jazz Samba on Verve. It was a quiet record, gentle and beguiling. It's impossible not to like Jazz Samba. And so, as the bossa nova craze exploded across America, it was inevitable that other artists and labels would try to copy it.

It's true, Blue Note and Rouse were riding a wave that someone else created. But they also made it their own. Bossa Nova Baccahanal is a cross between bossa nova, calypso and hard bop. Not exactly a giant leap from Jazz Samba, but not a slavish copy either.

Rouse is an odd choice to lead the band. From 1959 to 1970, he was a member of the Thelonious Monk quartet, a band that played very serious, complex and interesting music. Here, Rouse plays lighter and more joyfully. Joining him are two guitarists, Kenny Burrell and Chauncey "Lord" Westbrook, playing mostly acoustic, Spanish-style guitars. It works. It's fun.

Availability: Not rare, but not common either