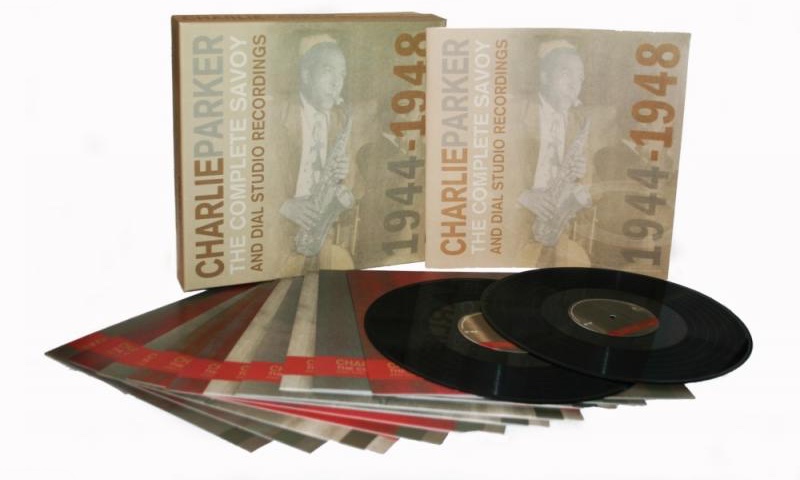 There was a sense of air and body to Parker’s horn and Miles Davis’ trumpet that previously seemed buried.

So it is no secret that the entertainment industry is floundering these days and that record companies are doing just about anything to snatch some bucks away from the pirates and casual listeners. Perhaps this is why vinyl has become such a hot commodity. Blue Note spent the past two years reissuing classic titles on black wax and word on the street is that Impulse will be doing the same shortly.

There was a minor hint that Savoy Jazz, the independent record label established by Herman Lubinsky in 1942, was set to reap the benefits of the vinyl revolution last spring. Record Store Day brought the titles The Charlie Parker Story and Curtis Fuller's Blues-ette into the fold, although the quality of these releases was suspect at best. Six months later, the news spread that Savoy was preparing a vinyl release of Parker's Complete Savoy and Dial Studio Recordings on a 10-LP set that would be an equivalent of the company's 8-CD package which came out in 2000.

Now much like the highly celebrated Bill Evans Village Vanguard material that received a stellar vinyl release last year, the transfer would be done from digital masters. The tapes are just too old to rack them up on a Studer A-80 and hope for the best. Now as far as can be gleaned, it seems that the very same 2000 transfers that produced the CD set have been used here, with the LP mastering being done by Wes Garland at Nashville Record Productions, home to such vintage equipment as a completely restored 1955 Sully lathe.

There is a sense of déjà vu about the packaging job here as well. The same cover art and cardboard-like motif has been retained. A 36-page booklet mirrors the one used for the CD set, although the larger size allows for more photos and artifacts being included. Each 180 gram LP is housed in a high quality sleeve that is then slipped into a thin jacket which conveniently lists all the discographical information for the selections contained on that particular disc. It is quite a heavy and attractive looking set. However, it seems that the box is too small, so the lid can barely contain all the albums and booklet. Furthermore, the lid of my review copy had sustained damage on all four corners. Hopefully retailers do a better job of securing this hefty set for shipment.

Getting to spin these iconic sides was nothing but a pleasure. Compared to the quality of the RSD Savoy sides, these LPs were hefty and extremely quiet. Warpage was not an issue and no stray marks or defects could be found. Having the CD set at my disposal also allowed me to make some side by side comparisons and without fail the vinyl trumped those shiny discs every time. There was a sense of air and body to Parker's horn and Miles Davis' trumpet that previously seemed buried. More importantly, you could actually hear the finer details of Max Roach's drumming like never before. Even the earliest Dial sides with Tiny Grimes and Dizzy Gillespie seemed to retain more transparency and detail than in previous incarnations. Much like the previously mentioned Evans set, there was a body and balance to it all that managed to make everything sound just right.

If there be but one caveat, it would be that in the vinyl format the sequential presentation of all takes of a particular tune can make for some tedious redundancy. And at a sizable 218 separate tracks (some complete, some incomplete, false starts, etc.) there is whole hell of a lot of ground to cover. By contrast, the CD can be programmed or tracks can be skipped if one wants to simply hear the master takes. This is not such an easy task to perform with a turntable. Regardless, in the final analysis, this vinyl edition might just be the definitive version of this highly prized music.

Beloved of The Sky

Way Out West: The Deluxe Edition

Other Worlds Other Sounds