Charlie Daniels Band at the NYCB Theatre at Westbury 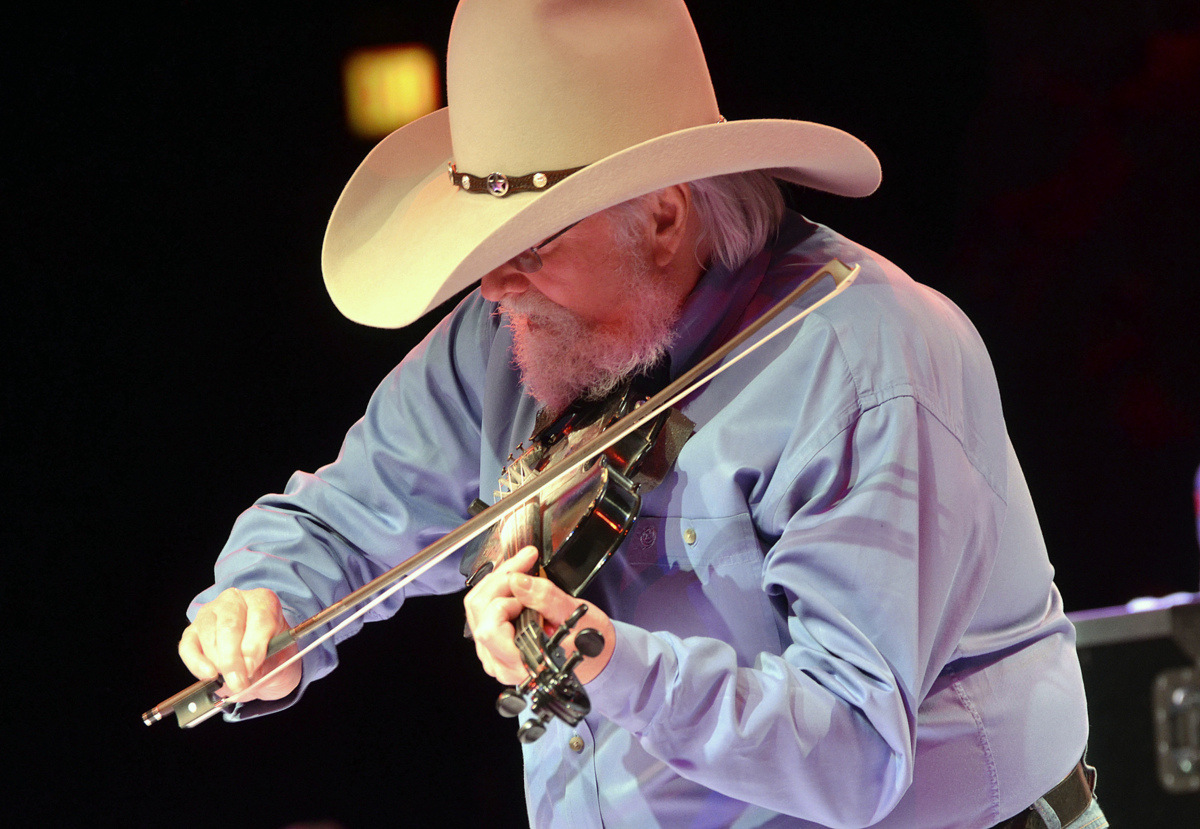 Charlie Daniels is an American treasure. The 77-year-old singer/guitarist/violinist, who will celebrate his 78th birthday in late October 2014, has been writing and performing since the '50s. In 1964, Daniels co-wrote Elvis Presley's "It Hurts Me." During the early part of his career, he was a working Nashville session musician, playing on albums by, among others, Bob Dylan and Leonard Cohen. In 1971, he recorded and released his first solo album, Charlie Daniels (Kama Sutra Records). He has also played fiddle on many of The Marshall Tucker Band's early albums, Hank Williams Jr.'s Hank Williams, Jr. and Friends (MGM, 1975) and produced The Youngbloods'Elephant Mountain (RCA, 1969) and Ride The Wind (Warner Brothers Records, 1971) albums.

Though he is (arguably) best known for his hit song "The Devil Went Down to Georgia," Daniels has also had other Top 40 hits including the Southern rocker "The South's Gonna Do It Again," "Uneasy Rider," "The Legend Of Wooley Swamp" and the patriotic songs "In America" and "Still In Saigon." During his fifty-plus year career he has he has had hit songs on the rock, country, pop and Christian charts. He has received numerous Grammy and Country Music Association nominations and awards as well as many accolades from his peers; he has been inducted into the Grand Ole Opry and the Musicians Hall of Fame and Museum.

It may have been a sleepy, warm, but somewhat drizzly Saturday evening on Long Island outside of the venue, but inside it was steamy, hot and alive with anticipation as the New Riders of the Purple Sage, the first of Daniels' two opening acts took the stage. The band, alternately known as the New Riders and NRPS seamlessly fit in with the country/southern rock genre that Daniels has come to embody. Though the group was spawned by the San Francisco psychedelic rock scene and originally featured a number of the members of the Grateful Dead, over the years the New Riders have developed a huge following in its own rite. Though initially plagued by less than stellar sound, the band's (David Nelson on guitar and vocals, Buddy Cage on pedal steel, Michael Falzarano on guitar and vocals, Ronnie Penque on bass and drummer Johnny Markowski) short set was quite strong featuring many old songs and a newer offering: "I Don't Know You" from 1971's self-titled debut album (Columbia Records), the newer song "Prisoner of Freedom" from 17 Pine Avenue (Woodstock Records, 2012) "Louisiana Lady," "Henry" (both from the debut album) and its biggest hit, the set-closing "Panama Red" from The Adventures of Panama Red (Columbia Records, 1973).

Following the New Riders and a very short intermission, Southern rockers, Molly Hatchet took the stage. Formed in 1975 in Jacksonville, FL, Molly Hatchet is best known for their hit song "Flirtin' with Disaster" from the multi-platinum album of the same name (Epic Records, 1979). With most of the original band either having moved on to other projects or having passed-on, the current line-up features band leader Bobby Ingram (who has been with the band since 1987) on lead guitar, John Galvin on keyboards, frontman Phil McCormack (who replaced original lead vocalist Danny Joe Brown in 1996), bassist Tim Lindsey, guitarist and founding member Dave Hlubek and Shawn Beamer on drums.

When the band appeared on stage, McCormack dressed in a long sports coat and a cowboy hat sauntered up to the microphone and eschewed the crowd to join him in yelling "Hell Yeah!" over and over—each time louder and with more enthusiasm. When the roar of the crowd finally died down, the by now very worked-up audience was treated to a strong set that featured exactly what the band's fans expected—hit after hit, big, small and of course the fan favorites. The rockin' "Whiskey Man" was followed by "Bounty Hunter" and the audience ate it up. "Gator Country" was introduced as a song "about the great state of Florida!" McCormack had the rowdy multi-generational crowd filled with Millennials, Baby Boomers and the occasional Generation Xer eating out of his patriotic hand when he introduced "Edge of Sundown" stating, "These next couple of songs, I want to dedicate to Danny Joe Brown, the late Billy Powell and the men and women of the United States armed forces. Can I get a 'Hell Yeah!'?"

Next up was the southern-fried rocker "Beatin' The Odds" and "Jukin' City" the ode to the band's home town of Jacksonville, which sent the audience further into its delirium. Many audience members had by now taken to the aisles to dance and sing along. "Dreams I'll Never See" a cover of the Allman Brothers classic followed. "The Journey" which McCormack noted was from the first Molly Hatchet album on which he sang, Devil's Canyon (SPV, 1996) led directly into the set's finale. Ending the performance on the highest of high notes, Ingram, McCormack and their cohorts delivered a blistering version of "Flirtin' With Disaster." Then, as quickly as the band ascended to the stage, they were gone.

After another short intermission, it was time for the headliner. Following the band's standard "Tennessee Waltz" and "Notte Pericolosa" introduction music, Charlie Daniels strode confidently to the venue's small round stage along with his and his stellar band (keyboardist Shannon Wickline, Charlie Hayward on bass, drummer Pat McDonald, and Bruce Brown and Chris Wormer on dueling lead guitars) promptly blew the doors off of the intimate venue. The show opened with a rousing version of "Southern Boy" followed by "Drinkin' My Baby Goodbye." As he played and sang these songs, Daniels ran through a number of violin bows (fraying the horsehairs on each into fuzz). His well-trained roadies were always at the ready with new fresh bows enabling him to effortlessly continue playing.

Daniels, who bears more than a passing resemblance to Santa Claus, was dressed in a blue button-down shirt with blue jeans with a huge silver belt buckle and an oversized cowboy hat, addressed the crowd with a simple eloquent statement, "Good evening," he said, "I do believe it's Saturday night." Then with a slightly more urgent and raised voice, he asked, "Are you ready to have some fun?!" Those two simple statements followed by the roar of the crowd showed that, without a doubt, the evening's performance would be exciting, high octane and incendiary. Daniels then explained that his latest CD was called Off The Grid (Blue Hat Records, 2014) and that it was a tribute album featuring his versions of a number of Bob Dylan classics. He then performed a wonderfully countrified fiddle oriented version of "Tangled Up In Blue."

Though many know Daniels for his expertise and virtuosity on the electric fiddle, the man is also a fantastic guitarist. His roadies brought Daniels a beautiful Gibson Les Paul guitar and he and the band played "The Legend Of Wooly Swamp," the mythical tale about Lucius Clay who lived in a marshy, boggy area called Booger Woods. The audience sang every word along with Daniels from the very beginning through to the snickering "You can hear one old man laugh..." ending statement. The Latin-flavored "El Toreador" followed. "(What The World Needs Is) A Few More Rednecks" got the audience singing again and up on its feet.

Daniels is extremely patriotic. He bleeds red, white and blue. Prior to "In America" Daniels told a story. He said, "I was only 5, but I remember the cold Sunday in 1941, when our family gathered around my Granddaddy's radio to listen to the scratchy reports about the attack on Pearl Harbor. That's the day the world changed for me. The Second World War became very real to those of us in coastal North Carolina, where ships leaving my seaport hometown of Wilmington were sunk by German U-boats just miles off our coast. There was a very real fear that the Nazis would try to bring the war on shore. I learned then that only two things protect our nation: the grace of Almighty God and the United States military." He then led the crowd in the Pledge of Allegiance followed by a fiery version of "In America" during which he substituted the words "New York Giants fan" for the original "Pittsburgh Steelers fan" lyric.

It was at this point during the show that Daniels took a little break. He introduced Brown, and then sat down off to the side while Brown played his own composition, "Play Me Some Country Blues." The next song was the instrumental "Black Ice" which featured solos by each band member. Following "Black Ice," a stool was brought out for Daniels, who explained that he played on Dylan's Nashville Skyline (Columbia Records, 1969) album because another session guitarist was not available. When the recording session ended, Dylan was told that the original guitarist would be available the following day. According to Daniels, Dylan's response was, "I don't want another guitarist. I want him," and Daniels continued playing guitar on the album's tracks. Then he played another Dylan cover—"I'll be Your Baby Tonight" from Off The Grid. Following some raucous applause he played "Long Haired Country Boy" from 1974's Fire On The Mountain (Kama Sutra Records). Daniels then explained that in his early days in Nashville times were hard and how encouragement and a nice word can make all the difference. His fantastic version of Johnny Cash's "Folsom Prison Blues" was quite a tribute to the Man in Black. After the gospel hymn "How Great Thou Art," Daniels introduced his band, starting with Brown and ending with Wormer, who he said would "play a song you've heard all your life, but you ain't ever heard it like this." Wormer then took center stage and played a jaw-dropping solo electric guitar version of "The William Tell Overture." The evening ended with the obligatory genre-defining anthems "The South's Gonna Do It Again" and, of course, "The Devil Went Down To Georgia."

Due to time constraints and the three-act bill, none of the bands performed an encore. The crowd was definitely into the show as more than one audience member departing the arena area for the lobby, the concessions and the door was heard paraphrasing and exclaiming, "I told you once, you sonovabitch, I'm the best there's ever been."