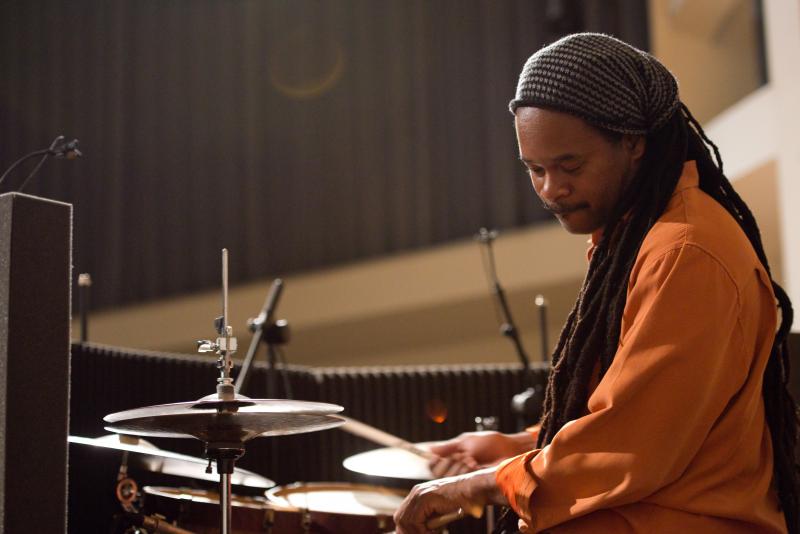 By ROB ROSENBLUM
December 6, 2016
Sign in to view read count

Charleston is pretty much a fly over city for jazz musicians. Visits by national and international jazz stars are a rarity. There are a handful of local musicians that fill in that vacuum and most of them were part of that sextet.

Pianist Tommy Gill was a much-beloved member of the Charleston, South Carolina jazz community and a significant influence on percussionist, Quentin Baxter. Gill's untimely death in August of 2014 at the age of 49 left a hole in the hearts of his many fans and fellow musicians.

There was no question about the musicianship of the quintet. You can't be in Charleston long without hearing about Baxter. He is probably the most prominent and highly respected jazz performer in the region. Singleton is best known for being the leading light of the Charleston Jazz Orchestra. Sterbank is among the local saxophone elite and department chair of the Jazz Studies program at Charleston Southern University. Hamilton and Gregory are less familiar names, but obviously in the same league as the others.

A drummer lead band is often a challenge. The temptation is to build the entire framework of the music around the drums, almost as if the percussionist is in the front line and the rest of the band is back up.

Nothing could have been further from the truth in this performance. If it weren't for this being billed as the Quentin Baxter quintet and Baxter himself providing all the conversational patter, you would never know he was the leader. At the same time, it was clear that his impeccable drumming provided much of the impetus for the solos of his band mates. His sense of dynamics and coloring, using his entire arsenal without obstructing the soloist brought out the music in bold relief.

All the songs were written by Gill. They opened with a Horace Silver inflected blues called "Underway." It introduced all the band members, including a polite and restrained solo by the leader. Singleton demonstrated a nice sound and good command of his instrument, but pretty much played by the book. Sterbank was coy, beginning almost timidly and then, before his chorus ended playing a full throated and emotional tenor. It was capped by the leader's brief but declarative solo.

"Waterway of Dolphins" was a quiet and sinuous ballad, showing off some real pianist mastery by Gregory and fine brush work by Baxter. Gregory is the youngest of the group and well worth watching. He has astounding technique, but he keeps it under control. Singleton had his best moment of the night with a very pretty solo. Sterbank's tenor was so very full and warm and he told an entire story in a single chorus -a sort of jazz haiku.

"Fury of the Sound" begins with an impressive bass solo. Hamilton not only has full command of his elegant instrument, but has a big robust sound as well. Baxter quietly enters the scene with waves of sound from his cymbals and Gregory covers that up with some very thick chords. Then it all erupts into the fury implied by the title. The song bounces back and forth from a funky head to a straight ahead bridge. Sterbank was at his most passionate here. Gregory followed up with McCoy Tyner-like waves of sound.

"Around The Bend" was their flag waver, played at a breakneck tempo and it was Baxter's chance to shine and he demonstrated both technique and a feeling for creating a full and engrossing sound. One could see the influence of Elvin Jones in exploring the heavier and deeper palettes of his drums set.

"Basco Joe's" was a kissing cousin to Herbie Hancock's "Watermelon Man," which demonstrated the more muscular side to Gregory.

The Passing was the most provocative piece of the evening. It began with an almost mysterioso mallet solo, bringing up the specter of Art Blakey. A swirl of cymbal sounds followed introducing an almost dirge-like melody. Sterbank's was at his most soulful—reminding me a bit of the late Clifford Jordan. The band played 13 songs in all in little over an hour. My overall impression was that it was done under time constraints that prevented full explorations of the tunes that they apparently revered. Few of the solos were more than a chorus—barely enough time to sink your teeth into the body of the musical template.

Charleston is pretty much a fly over city for jazz musicians. Visits by national and international jazz stars are a rarity. There are a handful of local musicians that fill in that vacuum and most of them were part of that sextet.

The concert was well conceived, balanced and covered a vast array of melodies and rhythms including a calypso ("Spring Today"), several blues, quiet ballads and hard-driving, straight ahead jazz. But it was more like enticing hors d'oeuvres rather than a full course meal. I sensed that this was just an inkling of what the band could have done with fewer songs played at a somewhat greater length.

They received a hardy standing ovation at the end from the completely filled 300 seat auditorium, so despite my reservations, Baxter obviously knew what his audience wanted and delivered.