In its own way, jazz is rooted in matriarchy, so it seems inevitable that Pillow would transform the music and the cosmos into a lady as well. 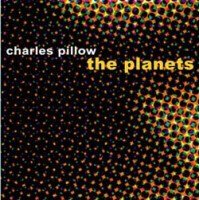 This review follows Charles Pillow: Part 1—Crossing the Divide between Jazz and Classical Repertoire, an introduction to the work of the reed player and composer, and Charles Pillow: Part 2—Pictures At An Exhibition (ArtistShare, 2005), a review of another Pillow disc.

Gustav Mahler said that a symphony should form a universe. If not the universe, then fellow composer Gustav Holst decided at least to include our solar system in his orchestral suite The Planets—though we don't know what he would have made of the multiple universes proposed by quantum physicists a century later. Here Charles Pillow takes up the challenge of transforming Holst's work into multiple universes of jazz motifs, where the sun, the planets and their moons become mythic expressions of human potential.

Inner space and outer space are reflections of each other. Just as scientists are investigating atomic physics and the outer limits of the planetary system—the large and the small simultaneously—the inner and outer worlds are connected. Pillow transforms Holst's orbiting planets into a universe of inner experience, of selves whirling about each other and trying to achieve a degree of harmony out of dissonances and clashes of minds. Not incidentally, he added "Earth" to Holst's planets beyond our own—an omission which highlights Holst's emphasis on outer worlds. And Pillow becomes even more personal when, at the end, he reflects on the worlds of his mother Eunice and sister Jean.

The nod to the women in his family hints at another transformation that Pillow has evolved from Holst. Stylistically, he seems to shift the gender of the solar system from masculine to feminine, from animus to anima in terms of Jung's formulation of the unconscious. This possibly unintended transformation reflects a current emphasis in physics on beauty as a criterion for truth.

In general, Pillow's planets are softer and more feminine than Holst's. In Bernard Tavernier's film, Round Midnight, the fictional saxophonist Dale Turner, played by Dexter Gordon, affectionately refers to his friend and co-musician as "Lady." In its own way, jazz is rooted in matriarchy, so it seems inevitable that Pillow would transform the music and the cosmos into a lady as well. This shift also fits well with his use of high register reed instruments and a small group format. Further, there is a British post-romantic strain in portions of the Holst Planets and Pillow echoes some of this sentiment, especially in portions using synthesized strings.

Both Holst and Pillow are aware that the planets and their moons are named after the gods and goddesses of Greek and Roman mythology. Both make strong use of that fact. Holst's "Mars" is the god of war, and Pillow's "Venus" is the goddess of love, beauty and seductiveness. Further mythological allusions occur in both the original composition and in Pillow's jazzed up transformation of it.

The piece begins with a dedication to the sun, "Sol," a short introductory movement that evokes the wide open universe in the manner of the opening theme of 2001: A Space Odyssey derived from Strauss' Thus Spake Zarathustra. Pillow does not follow Holst's order of the planets, but instead presents us next with "Mars," the fourth planet from the sun. In mythology, Mars is the god of war, to which Holst gave stentorian force in his music. With Pillow, the music suggests a tribal war dance rather than the destructive power of war itself. A vocal sound combines with the instruments to give a feeling of a chant. Then there is a slow, unexpectedly day-dreamy section. Oddly, the overall effect is more one of a lover's quarrel than a war.

"Saturn," the ringed planet, invokes a hard bop feel accented by Jim Ridl's piano solo. For Pillow, "Saturn" became two Saturns. He says that he was trying to create a sinister sounding kind of groove. But he stayed close to the original melody. "Saturn II" emerges with a bass line that is reminiscent of the loose, 1970s funk of trumpeter Miles Davis.

"Mercury" is the planet nearest the Sun and Pillow creates a suitably steamy feeling. Then the mythic winged-footed Mercury's speed is portrayed in a rapid-fire rhythmic loop and a combination of horn and synth sounds. This is followed by "The Secret of Pluto," in which this outermost spheroid, recently discovered not to be an actual planet, is portrayed as a barren, icy landscape—but with a post-romantic gentleness that further suggests a feminine universe. The use of partly synthesized strings in addition to oboe and English horn brings some of Holst's orchestral music into focus.

"Venus: Clouds of Our Sister" is warm and reflective, evoking a feeling of dwelling beneath the clouds of Venus, the planet nearest and most similar to ours. This is one of the first ideas Pillow had, though he later changed the concept of the tune, and it became a sort of groove piece. This movement is followed by "Venus: God of Love and Beauty," evocative of Venus in her seductive glory. The rhythm though harks back to the tribal dance of "Mars," reminding us of the eternal dialectic between women and men, love and war.

After a third variation, "Venus Maat Mons," Pillow brings us down to "Earth," using unusual sonic combinations to create an alien feeling. The movement represents perhaps the confusion of humanity and our link to both the animal world and the divine. There's a rocking Latin beat combined with what sounds like chatter potentially reflecting both the Tower of Babel and animals in the jungle. A bass clarinet solo occurs amid sounds of mysterious, cavernous spaces. Then some further sounds suggest human confusion and conflict beneath a motif in the highest horn register. The track is followed by "The Earth and Her Moon," a dance between the two.

With "Neptune: God of the Sea" we experience a claustrophobic feeling of being beneath the sea. The end of "Neptune" has a choir that's singing the melody, and it fades out that way. A postlude, "Neptune: Thalassa," is an impressionistic, Debussy-like movement. Thalassa is both a primal sea goddess and a moon of Neptune. Here we are perhaps on the surface of the sea on a warm, moonlit night. At times, it is as if we can hear whale and dolphin sounds in the water. This is a very subtle composition with a gorgeous melodic line arising towards the end, like Vaughn Williams' celebrated "A Lark Ascending."

"Jupiter" is Zeus, the Greek god of gods. The planet Jupiter is the largest, and takes an epic 12 years to make one revolution around the sun. The music conveys the large scale of this planet and god. Beyond Jupiter is "Saturn: Phoebe and Rhea," the latter being two of Saturn's moons. Again, the emphasis is on the female archetype. The movement has the feeling of an erotic dance a la Ravel's Bolero. This is followed by "Uranus," the Greek god of the sky, and the composition concludes with Pillow's own epilogue, "World of Eunice and Jean," dedicated to Pillow's mother and sister.

There is a feeling of relaxation and contemplation after having completed an arduous journey through the solar system and the pantheon of the gods and goddesses. We make a soft landing in rural America, with a Barber-like tonality.

Tracks: Sol; Mars; Saturn; Mercury; The Secret of Pluto; Venus: Clouds of Our Sister; Venus God of Love and Beauty; Venus maat mons; The Earth; The Earth and Her Moon; Neptune: God of the Sea; Neptune: Thalassa; Jupiter; Saturn: Phoebe and Rhea; Uranus; World of Eunice and Jean.