This is Mingus in more traditional bop territory, in a small group, and it is super. 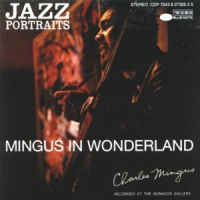 In May 1959, Mingus recorded his very best album ever: the incomparable Mingus Ah Um. And I mean incomparable in the literal sense. There is, literally, no other record quite like it. It's a big band, but not a Big Band. It's progressive but approachable. It's a tribute to the past that is also forward-looking. It is simply a tour de force.

That's the Mingus you know.

A few months earlier, in the same year, using two of the same horns—John Handy on alto and Booker Ervin on tenor—Mingus recorded this live quintet gem, Mingus in Wonderland. If it's not quite in the same league as Ah Um, it's still pretty exciting.

(Yes, I know I'm cheating here. Mingus never recorded for Blue Note Records. He released Wonderland on United Artists, and it was later re-released by Blue Note. That's good enough for me.)

Wonderland is a classic two-horn record, and it comes in two alternating flavors: hot and cool. Tracks 1 and 3 are burners; tracks 2 and 4 are ballads. Though it has only four songs, each is between 9 and 13 minutes, and three are Mingus originals.

First, the hot tunes. The opener, "Nostalgia in Times Square," is a 12-minute blues that gives Handy and Ervin plenty of room to show off their chops. The track features a happy, catchy melody and goes back and forth between a medium smolder and a hot blaze. "No Private Income Blues" is even faster and more furious—a barn burner from the get-go. It takes a supercharged turn when the saxophones trade fours, then twos, and at times it feels like the whole affair might fly off the tracks. This is bebop at its scalding hot best, though without much of the typical Mingus big band feel.

The ballads are pretty, but standard. "I Can't Get Started" gets the long-bass-solo treatment and is pretty enough. But "Alice's Wonderland," a Mingus original, is more interesting, with the two horns playing in tandem, then separately. It is achingly beautiful.

This is Mingus in more traditional bop territory, in a small group, and it is super. Kudos to the bassman-composer-leader for trying something new. There are better Mingus records, but Mingus in Wonderland is consistently interesting and fun.

Availability: Plentiful, but there are no new versions out there