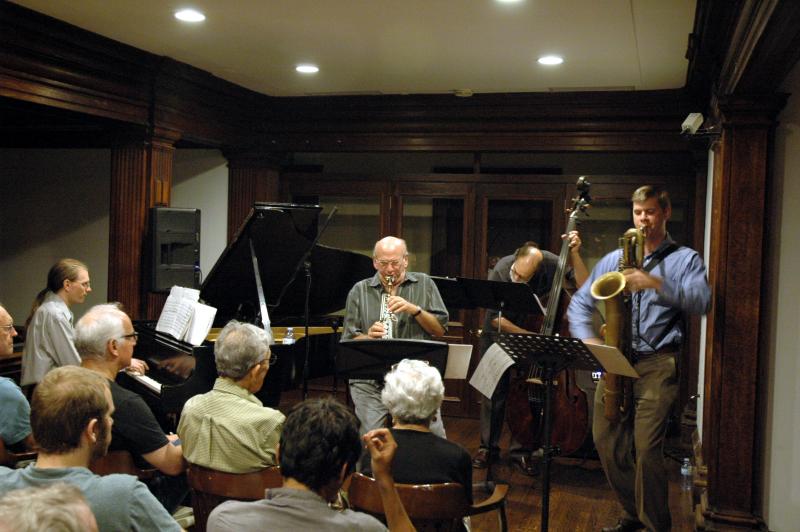 This concert by the Charles Evans Quartet can best be described as "jazz chamber music." The Quartet came together on the occasion of the release their second album, On Beauty (More is More Records, 2015) featuring compositions by leader and baritone saxophonist Charles Evans. The group also includes Dave Liebman on soprano saxophone, Ron Stabinsky on piano, and Tony Marino on acoustic bass. The concert was held at the Philadelphia Art Alliance, in its century old mansion that is now a museum of contemporary art. This was to be a serious listening experience.

Jazz chamber music is part of a noble tradition of elevating jazz from its status as a form of entertainment to an important art form often embodying European classical influences. Duke Ellington and the Modern Jazz Quartet were among the progenitors of this approach, which evolved to the point where classical musicians have been included in the ensembles, as was the case in Max Roach's Uptown String Quartet. More recently, iconic players like Charlie Haden, Wayne Shorter, and Brad Mehldau have made excursions into chamber jazz. In Evans' quartet, the musicians are seasoned jazz players who happen to be steeped in classical influences. The Euro-centric effect was carried forward as well in the instrumentation: the absence of drums, and the unusual combination of soprano and baritone saxophones.

Typical of classical music, and unlike the jazz emphasis on separate "tunes," the group performed two lengthy Evans compositions, each consisting of several movements that often wove seamlessly into one another. The first was "Subliminal Leaps," from the group's previous album by that name, the title of which seemed to refer to large tonal intervals that are masked by the activities that surround them. Liebman's pervasive influence (he is one of Evans' mentors and supporters) was felt in the extensive use of chromaticism to create melodic bursts, a seeming contradiction, but the only way to describe the changes in direction that could happen even in the space of two or three bars. The overall effect was of modern classical music with a jazz accent, a reflection of early to mid-twentieth century music where jazz and classical composers often borrowed liberally from one another. On another level, this reviewer even thought he heard resonances of Schoenberg's Verklarte Nachte and Hindemith's Mathis du Mahler, but this may have resulted from the group's invocations of early serial composition and Hindemith's style of orchestration rather than from any specific borrowing.

In such complex musical expression, the interpretation of what one hears is influenced as much by the listener as by what emanates from the horns. It's what the German philosopher Georg Gadamer called "the meeting of horizons" of the visions of the artist and the observer, the confluence of the cutting edge of understanding of both. It's also like listening for the duck in the wolf's belly: the hidden motifs that underpin the furious changes. In many ways, such a high interpretive standard was set and sustained by pianist Stabinksy's exceptional technique, resilience, and creativity, which added luster and formal structure to the frenetic activity of the saxophones.

The second piece, "On Beauty" was a still more extended composition that began with a lengthy cadenza by Evans. All About Jazz contributor Glenn Astarita aptly described Evans' remarkable improvising capabilities as follows: "(His) polychromatic expressiveness and remarkable fluency shines... with... often swirling and interconnected theme-building sprees, casting a semblance of perpetual motion amid the sax masters' galvanizing, pumping and cyclonic improvisations." Evans seemed to draw from an inexhaustible source of ideas as he created the musical equivalent of a novel, about how beauty takes many forms, the light and dark, the pretty and the ugly, evading definition. But he could only accomplish this with the help of master musicians like Liebman, capable of negotiating the dense harmonies. Once the group joined in with Evans, the possibilities of co-improvisation seemed limitless, and there were times when the players were so coordinated in complex interaction that they created the impression of a much larger ensemble.

References to the twentieth century musical legacy kept coming on strongly. There were Stravinsky-like passages of rumbling genesis, a wild bacchanal, interspersed with more reflective melodic developments. A swinging movement sounded like it could have come from Ellington's Black and Tan Fantasy. The music deftly navigated between passionate emotion, sentimentality, and intellectual contemplation. For example, as Marino was taking a metronomically measured bass solo, he suddenly relaxed the tempo and went into a brief emotional interlude in the expressive manner of the great Scott LaFaro. Then there was a humorous parody of swing. The performance ended in a frenzy of dense improvising with Liebman and Evans making squeaks and squawks that could have caused a riot -as happened with the first performances of Stravinsky's Rite of Spring and Coltrane's Meditations. Here, the audience of reserved intelligentsia merely rose to their feet and cheered loudly.

As suggested, this reviewer frequently heard connections to the music of the 1920's and '30s, when Ravel, for example, borrowed heavily from Gershwin and vice-versa. He especially, though, was reminded of a group of composers in Paris' Montparnasse District called "Les Six," which included Arthur Honegger, Darius Milhaud, and Francis Poulenc. Collectively, they were out to shake up the musical traditions and preferences of the time, borrowed freely from jazz and cabaret music, and were the musical compatriots of the "Lost Generation" of Hemingway and Gertrude Stein. Indeed, the music evoked the existential ferment and artistic temperament of post-World War I Paris, when the future was up for grabs. Could it be that the jazz world is currently in a similar state?