By STUART BROOMER
March 2, 2010
Sign in to view read count 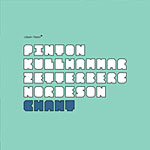 This beefy quartet was drawn from existing Stockholm bands by baritone saxophonist/clarinetist Alberto Pinton at the suggestion of Clean Feed producer Pedro Costa. As bassist Torbjörn Zetterberg describes it in his liner note, it's half of his octet, half of tenor and baritone saxophonist Jonas Kullhammar's quartet, half of Kullhammar and drummer Kjell Nordeson's quartet Nacka Forum and more than half of Pinton's quintet. The group that emerges from three days of live recording in Coimbra, Portugal is a free-bop powerhouse, the two-saxophone frontline producing a startling breadth of sound. The compositions are particularly strong, with four from Pinton and three each by Kullhammar and Zetterberg.

Kullhammer's abbreviated heads on "Chantarello" and "Chantpagne" provide all the momentum the band needs, feeding the tenor saxophonist's rhythmic drive as he mixes naked major triads, honks and offside commentary with both acuity and intensity. Pinton and Zetterberg provide more developed and often more reflective pieces, including the former's complex yet lyrical "Soul Samurai" and the latter's richly conceived and voiced "Den Stora Väntan," which develops into ear-bleed sonics from the two saxophonists, at times giving the sensation of a factory with feeling.

It's clear here (and from Mats Gustafsson's example) that Sweden encourages the most forceful members of Adolphe Sax's family. Pinton's drive and sonic template are titanic and Kullhammar is comparable when he turns to the lower horn. At times, in fact, Kulhammar overblows the lower range of his tenor in a way that's uncannily baritone-like and it's all pushed along by the urgings of Zetterberg and Nordeson, as forceful and thoughtful a rhythm section as you could hope. Except for Nordeson, who has a strong presence in San Francisco, the musicians aren't well known outside of Scandinavian jazz circles, but there's a combination of thought and passion in this music that makes it essential hearing.