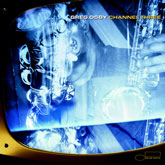 Progressive jazz enthusiasts have to admire an artist who is willing to take chances. From early beginnings with the creative music outlet of the M-BASE collective and popular music which included early hip hop, to becoming one of today's most individualistic jazz artists, saxophonist Greg Osby has continued to create music that is grounded yet is always flourishing towards inventiveness. After having recorded in various jazz ensembles small and large, it's hard to believe that Channel Three is his first trio recording as a leader.

Joining Osby is friend and drumming master Jeff "Tain Watts, who has been a prolific session man on numerous recordings, led his own groups, and been a longtime member of Branford Marsalis' quartet. Osby has been noted for being a talent scout and mentor to young musicians; he completes the trio with a real find in twenty-something year-old bassist Matt Brewer, who's been touring with him since 2002. One listen to his sound and skills and you can hear why. The distinct talent of each musician, combined with Osby's vibrant ideas, cover six originals bookended by two standards. As on previous recordings, Osby's signature is written all over the compositions with dynamic and cutting music.

Swing is the thing on Ornette Coleman's "Mob Job" as the trio executes heavy and loose interplay, with the alto singing the melody lifted by the pulsating bass and drum rhythm section. Osby is the primary lead soloist, but Watts and Brewer provide colorful and muscular playing along with the changing tempos and arrangements. Osby's signature quicksilver alto is ever-present, but a slight twist finds him playing soprano sax on a few selections. On the solitude of "Diode Emission, the soprano is beautiful and precise as the solo is surrounded by atmospheric bass and percussion work.

Watts' drumming takes center stage on the marching band cadence of "Fine Tuning and the sax/drum duo "Please Stand By as he provides pure energy in typical form. But the real ear-opener lies in the bass strings of Brewer, who solidly holds down complex numerical rhythms that Osby is long noted for, with power and ease. One of the highlights is the groovy title piece "Channel Three, with each of the musicians adding voice chants intersperced with the music; as Brewer's electric bass brings slight memories of Weather Report and bassist Jaco Pastorious.

One minor quibble is that Watts and Brewer don't have enough out-front solo time, but a careful listen reveals that they made indelible marks on another standout recording by one of today's foremost jazz artists.