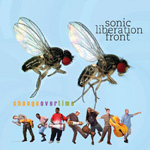 There are a lot of elements to this music—too many, in fact—and they gel only intermittently. Percussion workouts, vocals, the overt use of Pan-African music, and horn solos all vie for attention, but after a few listens, many of them just seem to fade into the background.

The programme starts well enough with "The Next Thing That Happens," but over the course of its four minutes, its promise far exceeds its realisation, and the Ornette Coleman-esque line of the horns proves largely to be an end in itself. Dan Scofield on alto sax has a sadly brief opportunity to show just how deeply conversant he is the vocabulary of free music, and the fact that he doesn't get more space is frustrating.

Kevin Diehl's subtle electronica figures prominently in the opening of "D'Accord, Baby," and the first five minutes or so comprises some of the most telling music on the disc. By around minute six, however, chanted vocals are in the midst of usurping the established mood. And for all of the relatively organic feel of this development, the band still seems intent on laying on us every element of its undoubted collective knowledge on every track.

By the time "Omio" rolls around, however, that impression has passed. Clocking in at under three minutes, the track features Chuckie Joseph's singing and sounds like world music for people who don't really like world music (per se), and it could actually be serving as background music in a book store near you before too long.

"Glass Eyes" is downright frustrating in so far as it offers a glimpse of what this band could be all about if it could only tighten the focus. The Art Ensemble Of Chicago is evoked here as elsewhere, and the balance between horns and percussion is struck with a deftness that would be more than welcome if there was more of it.

The sense of frustration persists with "Ouaga To Bobo," where the first nigh on three minutes prove that they've got a grasp of the slow build. When this is resolved with a percussion workout that sounds like it was a whole lot more fun to play than it is to listen to, the skip button comes into its own, however—especially when the thing is resolved, if indeed that's the word, with a reprise of what went on at the top.

The mood when this music was being made hasn't made it on to the recorded document, and that's kind of sad, but it has no bearing on the fact that more ends up less in this case.

The Next Thing That Happens; D