By JEFF STOCKTON
January 29, 2007
Sign in to view read count 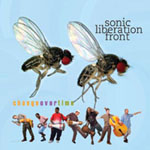 Twelve musicians play in the Sonic Liberation Front on Change Over Time, but only three appeared on the group's previous release, 2004's critically acclaimed Ashe a Go- Go, including musical directors Kevin Diehl and Chuckie Joseph. As you would expect from a band led by drummers, the music leads with an African/Cuban/Caribbean percussive attack that reminds you of David Murray's work with the Gwo-Ka Masters, Fela's blend of ripping saxophone, multiplicity of drums and hypnotic vocals—and, when they talk trash and funk it up on the title track, the Rebirth Brass Band.

SLF sprinkles a bit of electronica here and there, as well, enhancing "D'Accord, Baby by providing a bass line which allows for Matt Engle's plaintive playing with his bow. On "Glass Eyes, which begins echoey and dirge-like, Engle's bass is punishing and Dan Scofield (Engle's band mate in Shot x Shot) and altoist Julian Pressley (sideman for Illinois Jacquet and Odean Pope) bruise with horn solos that recall Ornette fronting Prime Time. On Engle's own composition "Dominical, he gives himself an excellent opportunity to show off his pizzicato skill, but occasionally the electronic effects get in the way and interrupt the flow. On "Ouaga to Bobo the transistor noise finally yields to the ever-present bata drum beat.

Considering the near-complete lineup overhaul, the theme of Change Over Time is the evolution of a band and its sound. But it's more a testament to the multicultural work ethic and rich cosmopolitanism of SLF's Philadelphia than any departure from the music this band has previously made. Sonic Liberation Front makes jazz music with ears tuned to the big world around them.

The Next Thing That Happens; D