By DOUG COLLETTE
September 16, 2019
Sign in to view read count 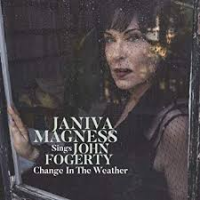 Janiva Magness makes no effort to hog the spotlight as she Sings John Fogerty and as a direct result of her generosity of spirit, Change In The Weather stands even more distinctly on its own terms as a formidable piece of work. In interpreting this selection of twelve songs by the titular leader of Creedence Clearwater Revival, the Grammy Award nominee and savvy studio collaborators (like Taj Mahal on "Don't You Wish It Was True") end up shedding some more light on a solo career that might not always get its due and reminding of the brilliance of that aforementioned band in its heyday.

Producer/musician/mixing engineer Dave Darling harnessed plentiful talent through his work on Change In The Weather (including the engineering expertise of his nephew Zachary). The spooky chant cum percussion arrangement on "Bad Moon Rising" might seem over-obvious but it works. From a different perspective, it was by and large smart to adhere to the original chart on "Fortunate Son," but the addition of Arlan Oscar's ringing piano adds real distinction to the performance. Likewise, the presence of Rusty Young, long-time linchpin of Poco, on "Lookin' Out My Back Door:" his vocals, guitar and dobro sound like a natural extension of the song. As the next to the last cut here, its peppy rhythms so clearly stand out in even sharper relief as juxtaposed to the languorous likes of "A Hundred And Ten In The Shade" as it concludes the album.

That said, not all twelve tunes or tracks thereof here are equally scintillating. The borderline saccharine "Someday Never Comes," for instance, doesn't compare to the vivid narrative within "Lodi." Magness' vocal delivery on the former is thankfully as restrained as the accompanying musicianship (more so than on an unnecessarily extended rideout of "Change In The Weather"), but it's an errant piece of sequencing right alongside the similarly-pedantic "Wrote A Song For Everyone" and the group vocals on the refrain are heavy-handed, especially in comparison to the tasteful, restrained guitar solo.

The contrast in the pair of aforementioned closing tracks emphasizes the seasoned virtues of musicianship and overall song choice that distinguish Change In The Weather, particularly because the throaty but mellifluous singing of Janiva Magness is, most appropriately, the last sound on the record. Her personal notes on all the material in the enclosed color booklet, plus extensive credits within the similarly-designed earth tones in the graphics of the CD digi-pak, are simply the offshoots of the fundamental inspiration she clearly supplied to this project.

Change In The Weather; Lodi; Someday Never Comes; Wrote A Song For Everyone; Don’t You Wish It Was True; Have You Ever Seen The Rain; Bad Moon Rising; Blueboy; Fortunate Son; Deja Vu (All Over Again); A Hundred And Ten In The Shade; Lookin’ Out My Back Door.