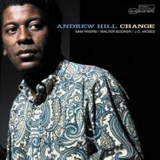 Available for the first time in its entirety, the aptly title Change is a rich and complex collection reflecting the gradual shift in Hill's writing from advanced traditional structures to outré forms. One of the finest avant-garde Blue Note titles, it is representative of the then burgeoning inside-outside aesthetic embraced by fellow label-mates Sam Rivers, Cecil Taylor, Grachan Moncur III and Jackie McLean.

The jaunty "Illusion" deconstructs a montuno form with irreverent charm, while "Hope" intensifies from somber reflection to roiling vigor over a bustling waltz rhythm. The foreboding "Desire" blends a mid-tempo 5/4 cadence with focused deliberation and searing lyricism.

The alternate takes provide further insight into the quartet's working methods. "Violence" is compact and intense, while "Desire" is brisk and assertive.

Knotty, jagged and abstruse, Hill's music from this period can be difficult for mainstream listeners, but yields great rewards. A fascinating document in the discography of one of the most important jazz composers of the twentieth century, Change is an essential reissue.