By Dan Bilawsky
February 2, 2017
Sign in to view read count 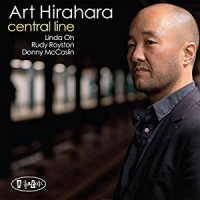 The central meaning behind pianist Art Hirahara's Central Line is simple to suss out. In literal terms Hirahara is referencing the Chuo-Sen (Central Line) subway line, a means for establishing his own relationship to the jazz world in Tokyo. But the message of the album runs deeper than that, tapping into the central lines that link person to place, past to present, culture to culture, and musician to musician. This is an exploration and manifestation of those lines that bind, and it's a fine one at that.

Nobody could've dreamed up a better crew for Hirahara to work with on this album—the top-shelf rhythm duo of bassist Linda May Han Oh and drummer Rudy Royston rounds out the core group, saxophonist Donny McCaslin drops in a few times as a guest—and the music benefits from the presence of such heavy company. But Central Line doesn't belong to the sidemen. Its intentions are still Hirahara's to have and control. Nobody would mistake this for anything but his work.

Hirahara could've used this as a showcase for running fast, free, and hard, tapping into the musical might of his bandmates, but he doesn't. Instead, he typically uses them to frame his pensive side in different ways. There are certainly moments of excitement—note the title track's rhythmic undertow, the swing unleashed on "Entanglement," and the joyous atmosphere and odd-metered groove of "Kin-Ka: Gold Coin" for confirmation. Those moments, however, don't define Central Line. Like much of Hirahara's output, this is more a thinking man's album than a call to arms. His meditative music—the Japanese traditional "Kuroda Bushi," Kan'ichi Shomofusa's Randy Newman-esque "Yuyake Koyake," his own originals, such as "Introspect," "The Giant Catfish," and "Tracing The Line"—acts as the guiding light here.

High times are all well and good, but simply nothing compares to hearing Hirahara contemplate through the keys. His musings bring you into his world, a place where contrasts and commonalities are both embraced and drawn out.