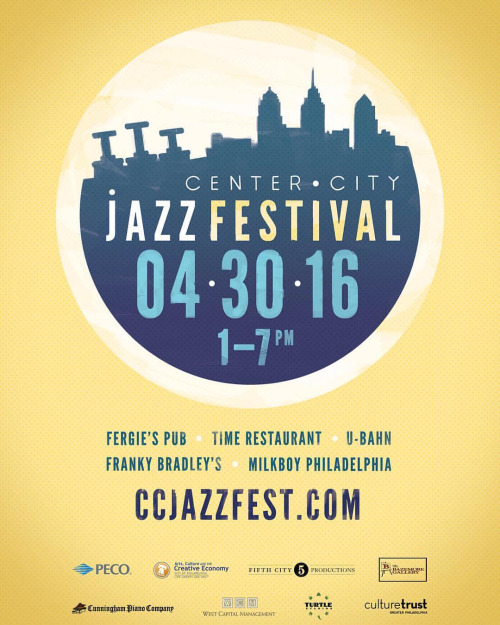 "The Fifth Annual Center City Jazz Festival is officially sold out!" Thus tweeted a spokesperson from @ccjazzfest two days before the start of Philadelphia's annual celebration (most likely its founder, local trombonist Ernest Stuart). I'm not sure if there was any backup plan for late stragglers; clearly the familiar crowd knew they didn't want to wait too long to get in on the festivities. The timing had it sandwiched between one dim dreary week and another, but the gods decided to give the city a clear, sunny and almost vaguely spring-like time for International Jazz Day on April 30th. Coincidence? Surely not.

Stuart's endeavor has grown from an uncertain 2012 Kickstarter campaign to a well-sponsored and enthusiastically attended affair that took over five venues this time around. Each hosted a series of acts, mostly from right in town or from New York City, for a total of 20 performances and almost seven hours of musical enjoyment. It does leave one spoiled for choice in having to decide which place to hit during a given time slot, but that's probably not such a bad problem to have. At least it helped a little to have the set times occasionally staggered 15-45 minutes apart.

Fergie's Pub isn't the kind of place you usually think of when you imagine a music venue, but it's nothing if not homey. The upstairs room was already almost filled when Mike Cemprola kicked off at the start of the afternoon. The saxophonist and his quartet gave one of the more straightforward club-style sets of the day, showing a little Sonny Rollins influence (beyond their leisurely rendition of "Airegin," that is) and offering some new original pieces. It was a lively, swinging treat and an excellent setup for everything else still to come.

The big first-floor windows were open onto the street just up the block at Time Restaurant (apparently named to suit the half-dozen clocks adorning the dining room, only one of them actually right). At the very least, watching and listening from the sidewalk was more convenient than playing sardines with the packed-solid standing crowd that had already formed inside the door. Anibal Rojas and friends were brightening the place with a worldly mix of Latin feel and electric soul. Indoors or out, the neighborly feeling of community was there for everyone to enjoy, whether they were getting cozy together by choice or otherwise.

Half a block over and around the next corner, Franky Bradley's is a place already familiar with many varieties of entertainment (wink wink nudge nudge), so it wasn't out of character to host the fusiony good time offered by Three Oranges. The keys and guitar were funked up in classic fuzzy 70s style while the saxophone and horns out front topped it off with a dash of soul. These fellows know how to make a room hop. It was by far the biggest space of all the day's venues, but the seats were already full and the outer floor space was also filling up fast. Just when it seemed they were trying to blow a fuse, they decided to ease into a little swing with Willard Robison's "Old Folks." Dynamic they certainly are; predictable they're not.

Masami Kuroki was perfectly at home on Time's bandstand, seeing as how he was one of the first performers to play there when the place first opened. It was quite a change from the venue's previous set, replacing the modern electric trappings with some sweet-toned guitar in the vein of Jim Hall. The quintet's treatment of "Eleanor Rigby" almost ventured a bit too close to Muzak—a treatment with steel drums, no less—until a lively break spiced it up and brought the loudest cheers yet from the room. He's one of those performers that can't seem to stop smiling big, letting you know he's feeling it as much as you are.

On the surface The Jost Project is arguably even more at risk of venturing into elevator-music territory just because of what they do—bringing a smooth acoustic treatment to their roots in classic rock and roll. It's a way to grab some ears and "maybe try to bring more listeners to jazz," as vocalist Paul Jost put it early in their set upstairs at Milkboy, in between unfamiliar arrangements of Joe South, Donovan and Paul McCartney. With supple double bass and Tony Miceli, a dead ringer for Jerry Garcia on vibes (errrr, pun unintended), the mix was skillful and vigorous enough to avoid novelty status. The audience sang along and laughed especially heartily at "Walk This Way," even before it got a helping of Tony Bennett-style scatting.

Orrin Evans could hardly contain himself behind the keyboard back at Franky Bradley's. He was jumping up, stomping and cheering even before he and Captain Black Big Band played a note. It's fitting that they were at the biggest venue; they couldn't have even fit ten people onstage anywhere else. It was indeed a classic big-band lineup, but his piano was of the electric Wurlitzer variety and this crew is much closer to funky R&B than Dixieland swing. No doubt it's only another reason that, as Evans happily pointed out, the sold-out festival included plenty of young faces. If there's one thing you can count on in the jazz world, it's enough variety for everyone.

In the low-key underground space at U-Bahn on Chestnut, Philly saxophonist Tim Green kept things much simpler with only bass and drums to back him up. He paid an affectionate tribute to his former mentor Marvin Miller, treated us to some of his own pieces including the charmingly out-of-season "October," and generally provided some wonderful melodies to drift to. It seemed straightforward and almost tame after some of the wild earlier sets, which was just fine for this dim-lit room toward the end of the day.

You don't see a jazz combo led with a harp very often... actually, you probably haven't seen it at all, let alone one that dabbles in hip-hop or R&B. That's exactly what Time had in order to close out the official schedule, with Brandee Younger playing a dinner-and-drinks set of the hippest kind. In a vast lineup with something for every taste, this was one of the most compelling ways to top it all off—fresh, inventive and always ready to go somewhere different, like the rest of the festival and in the best adventurous spirit of jazz itself.