By BRUCE LINDSAY
October 25, 2010
Sign in to view read count 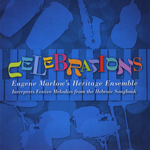 Celebrations, the Heritage Ensemble's second album following Making The Music Our Own (MEII Enterprises, 2006), is subtitled Eugene Marlow's Heritage Ensemble Interprets Festive Melodies From The Hebraic Songbook. The review copy arrived with a polite but serious covering letter rather than the usual hyperbolic press release. The album's closing track is a lecture by bandleader and keyboardist Marlow on "The Heritage Ensemble: its history, repertoire and philosophy." Not a typical jazz recording, then. A preservation project for musicologists, not fans? An academic treatise aiming to educate rather than entertain? Possibly.

But then the music starts—and from the first of Marlow's chunky, low-down, piano chords on "Chanukah O Chanukah" it's clear that this is an album of joyous music from a tight and talented band. Marlow gives the Hebraic tunes, mostly associated with the festivals of Chanukah or Purim, some delightfully inventive arrangements that bring the melodies firmly into jazz, rather than simply adding some jazz touches to the traditional melodies; swing, bop, Afro-Cuban and other styles bring real variety to the table.

Marlow's original, "Yotvata," is beautiful. Unusually, the recording is taken from two separate performances: the opening and closing sections are played by the Lebanese classical pianist Nada Loutfi, while the mid-section is an improvisation by the Ensemble, with Marlow and Hashim both creating lyrical and reflective solos.

Much of the credit for the sheer joy this album evokes must go to the percussion players. Grammy-nominated Bobby Sanabria is outstanding, his drumming totally in tune with the melodies and crucial to their immediacy and groove. Cristian Rivera adds color and tone with his percussion, a perfect complement to Sanabria's drums. "Layehudim Haitah Orah Ve-Simehah Ve-Sasson Ve-Yakar," from the festival of Purim, features one of their most insistent and groove-laden percussion breaks, but almost every tune on the album is enhanced by these stylish players.