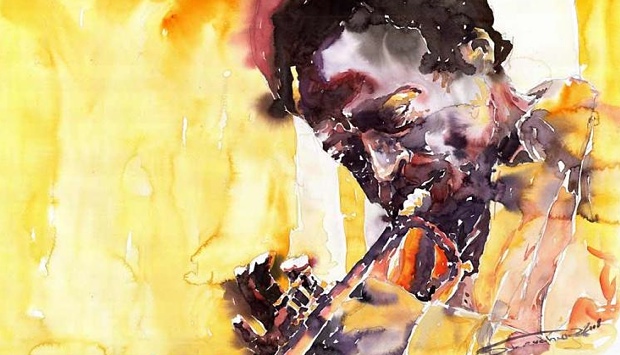 All About Jazz senior writer R.J. DeLuke also compiled several from his past interviews with various ex-band members—and we included a salty one by Miles for good measure.

If you know of a quote about Miles or one that can be attributed to him, please post it in the comments section below. I'll get us started.

"He was just such a great artist. People would just come to see him. Three notes from him were often enough for people to say, 'We heard Miles Davis,' and it was because it was so damn good... For me, Miles is the greatest." —Joe Zawinul from his 2007 interview

"If he couldn't figure what the right note was in a particular passage, he just wouldn't play it until he could hear it; rather than play a bunch of notes. When he finally realized he found something good, he'd play that note. He'd just take the horn from his mouth until he heard something great, then he'd play it. It's a really beautiful way to make music." —Marcus Miller from his 2008 interview

"I miss him dearly... Yes, I was there. Yes, I had a great time. I look forward to seeing Miles upstairs in the sky, trying it again." —Ron Carter from his 2012 interview

"Miles was obviously a wonderful opportunity and a great man who, thankfully, heard something in my playing that he thought was worth exploring and having in his group. When I got to New York he was so gracious and encouraging and welcoming, inviting me to his house many times." —Dave Holland from his 2006 interview

"Miles was the Scorsese and Coppola of jazz. He knew what you need to do to have a great production-lights, sound, position, script, etc. For him it was music and moving the people around to play what he heard. Almost to the man, most of us played a certain way with Miles that we never played again. Somehow he got you to do what he needed... and what you wanted." —Dave Liebman played on On the Corner and Dark Magus among others

"I got a trumpet from someone a few days after I heard Miles in my home town in Torino. I had many records of Miles. He was my favorite trumpet player. But I didn't even think about playing trumpet. Then I saw Miles ... Miles was so great. He played so good. He was so amazing. Physically, to see him in 1957 when he looked so good and was strong. He has so much charisma. You would look at him all the time. Even when he wasn't playing everybody kept looking at Miles. He was really attracting the eyes of everybody. Me too. I was fascinated... That night, I said—wow, I must try to play this instrument... I got a hold of this trumpet and I learned it by myself, just listening to Miles records." —Enrico Rava from his 2005 Interview

[On his first meeting with Miles] "He had me go to the piano to play something for him. I don't remember exactly what I played... He was like a doctor who diagnosed a musical deficiency. He came around and he showed me these chord progressions that turned a light bulb on in my head in terms of harmonic possibilities. It changed me forever, in terms of my hearing the music and my approach; a lot of harmonic tension and release." —Robert Irving III from his 2007 interview

"My relationship with Miles was very important for me. I always liked his wig. I always thought he was just a little bit different from the other great trumpet player of that time, Fats Navarro. Miles always had a little different approach, sort of Lester Youngish approach in a way of speaking. He was a little bit more thoughtful, a little bit more nuanced. I always liked that about him. He heard me play one time. I was playing opposite an all-star group that he was in and he offered me a job playing with him. Of course that was a big thing for me because I was playing with one of my idols. We were really good, good friends. Hung out a lot." —Sonny Rollins from his 2004 Interview

There is not a day that goes by that I don't think about Miles. My mentor and friend who taught me to always look musically forward and never look back. Happy birthday Chief! —Jason Miles played on Tutu and Amandla

And lastly, from the man himself...

"I fuck on the floor. I draw on the floor" —Miles to an interviewer asking why some paintings were displayed on the floor at a gallery opening.