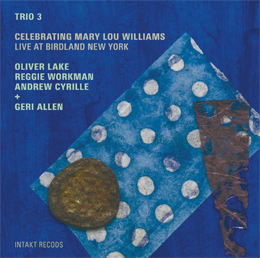 These modern jazz VIPs render a synchronized attack that incites a harmonious mélange of mainstream, progressive, and free-jazz during this homage to legendary pianist, composer and arranger Mary Lou Williams. One of the mainstays and redeeming traits of this live program relates to the musicians' inimitable styles amid their technical faculties and keen interpretative powers. With a consortium of diverse approaches, the trio merges jazz boogie-woogie with swing and gutsy solos on Williams' "New Musical Express."

Alto saxophonist Oliver Lake's yearning lines, free form bursts and knotty unison choruses with pianist Geri Allen keep this train rolling on a fast track, to complement the clamorous breakouts and tender dissections of the primary theme. It's a fifteen-minute exposition, where the band abides by a democratic group-based slant. Allen's fluid soloing, simmering chord clusters and mesmeric harmonics, intimate remembrances of Williams' dazzling technique, yet these crafty musicians inject several nooks and crannies into the mix, their distinct voices elevating the core concept of this project, amid their shrewd plan of attack, to a higher realm.