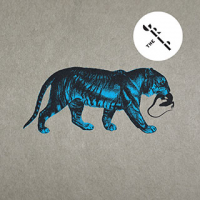 The Grip is an exciting new trio consisting of three well-connected London-based players each with a track record of proven success and innovation in a variety of contexts—saxophonist and flautist Finn Peters, tuba player Oren Marshall and drummer Tom Skinner. The group name is a reference to the cIassic Arthur Blythe album The Grip (India Navigation, 1977) because, back in 2009, Peters worked with that album's drummer, the late great Steve Reid, and, separately, Marshall has collaborated with the album's tuba player, Bob Stewart. Peters, Marshall and Skinner have considerable experience of playing with one another; the three previously worked together on Peter's acclaimed electro-acoustic project Music of the Mind, being featured together on the associated album release Music of the Mind (Mantella Records, 2010.)

The focus of that project was brainwaves in music (see the YouTube clip below for more information) and so involved extensive use of electronics. For its members, The Grip was a reaction to that and so the trio's music is completely acoustic and more down-to-earth, sounding very human. The group's cohesion, interactions and material were developed in front of live audiences before they took to the studio to record Celebrate... and that can be heard in music which sounds fresh, natural and flowing. Remarkably, the whole album was recorded in a day, giving it a relaxed, spontaneous, easy-going feel.

Across nine group compositions in a range of styles covering blues, free jazz, funk and beyond, the three combine as a unit that includes all of them but is not dominated by any one of them. This is not a trio of featured soloist plus supporting rhythm section but a three-way conversation of equals. Given his instruments, Peters naturally seems to be in the spotlight for much of the time but, throughout, the three distinct independent instrumental voices can be distinguished, woven together into a coherent whole.

In that, Marshall's tuba is vital to The Grip, supplying elaborate funky bass lines, which command as much attention as the sax or flute, as well as his own idiosyncratic interjections. In similar fashion, Skinner's drumming goes way beyond the requirements of maintaining a rhythm as he adds subtle sounds which add shading, depth and character to the ensemble sound. Taken as a whole, the album bursts with personality, verve and energy—great music that is also great fun. We must hope this trio prospers and records again very soon.