The Mississippi River Delta is an imperfect song played perfectly by an old woman losing her mind...

It occurred to me, as the bus in which I was riding, passed through what approximates downtown Des Arc, Arkansas, that when most scholars address blues music, it is always from the Mississippi Delta. I suspect that this more appropriately should be referred to as the Mississippi River Delta, an area of fecund flatland figuratively poured out the front door of the Peabody Hotel in Memphis and flowing into the surrounding bottomlands of Missouri, Arkansas, Mississippi, and Louisiana. The geopolitical area we refer to as "The Delta" is as socially and culturally conflicted as any 18th-Century British colonial conquest, replete with the beauty of indigenous art and the scourge of hatred and bigotry. The Mississippi Delta region is the United States' contribution to Mother Earth's third world countries. Once peppered with thriving communities and commerce, the delta is now a collection of mostly meticulously clean towns with main streets filled with empty storefronts like missing teeth smiling out of a still-proud and friendly face.

This is how Des Arc looked, a lot of Brinkley, Marvell, and Helena-West Helena on the Arkansas side and Lula, Friar's Point, Jonestown, Lyon, and, finally, Clarksdale, my final destination, on the Mississippi side looks today. Socially and culturally, these places are preserved like the surroundings of Pompeii after the eruption of Mount Vesuvius in 79 CE, static, frozen in time. One can find people drinking coffee at the favored cafe and buying carp, gar, and paddle fish out of the back of a pickup truck, netted just that morning, and eating Sno-cones outside the Tastee-Freeze. Save for the automobiles and clothing, it could still be 1950 in the Delta, and for our purposes the weekend of April 16, 2016, the 13th Annual Juke Joint Festival in Clarksdale, this is just fine. Despite its current social slumber, the Della remains richly creative ground.

Clarksdale, Mississippi is a cultural artifact that illustrates that one can only become a part of a place in time by taking it for granted. Thirty-years ago, while in graduate school, I practiced pharmacy over a good bit of the Mississippi Delta region, including Clarksdale. Among my patients were the families-of-origin of Mose Allison (Tippo, Tallahatchie County) and Thomas Harris, author of Silence of the Lambs (Rich, Coahoma County) as well as more locally known artists and writers. I was exposed to (often in the same breath) the humblest and most hospitable people, as well as, the most bigoted and backward individuals I ever met. It might be easy to dismiss this as being true anywhere, but this is not just anywhere, this is the American South, the most culturally-fertile and socially- conflicted region of the country. Where these two characteristics meet is what provided the grist that would become Rock 'n Roll.

While my Delta experience had a profound impact on my life and thinking, it was easy for me to assimilate into and become a part of an historical space-time and forget the cultural importance of Clarksdale to American Culture and cultural history. Clarksdale is notable for several reasons. It is the county seat of Coahoma County. Derived from the Choctaw Indian word for "red panther," Coahoma County, in addition to Clarksdale, had within its boundaries the cities of Coahoma, Friars Point Jonestown, Lula, and Lyon, all of which loom large in the Mississippi River Delta blues music historiography. Coahoma County was logically also the home to several notable American musicians, including John Lee Hooker (County), Rick Ross (County), Ike Turner (Clarksdale), James Carr (Coahoma), Conway Twitty (Friars Point), WC Clay (Jonestown), Bertha Lee Pate and Sam Carr (Lula) and Eddie "Son" House (Lyon).

Clarksdale is also where the great blues songstress Bessie Smith perished following an auto accident on the fabled Highway 61 on September 26, 1937. Smith's boyfriend, Richard Morgan, was driving the car when he underestimated the slow speed of a truck ahead of him. Morgan swerved, hitting the rear of the truck high speed. The tailgate of the truck clipped the roof of Smith's Packard. Smith, almost amputating Smith's right arm. Smith was ultimately taken to Clarksdale's G. T. Thomas Afro-American Hospital, where her right arm was amputated. Bessie Smith died without regaining consciousness.

The G. T. Thomas Afro-American Hospital, presently the Riverside Hotel, has a deeper significance as the locale where blues artists such as Sonny Boy Williamson II (Rice Miller), Ike Turner, and Robert Nighthawk lodged. While Ike Turner lived there, he wrote and rehearsed his song "Rocket 88" which would later be recorded by Jackie Breston and his Delta Cats and considered this first rock 'n roll recording. Guitarist Robert Nighthawk was reputed to have left his suitcase in his room there just before he died of a stroke and heart failure November 5, 1967. All of these people stories are what make Clarksdale and its surrounding area America's Cthulhu Mythos, the stuff of a sweaty dream dreamt on a brutal August night during cotton season. It has been recounted a million times in a million different publications on a million different subjects. This place has to be ground zero. Wait a minute...Ground Zero is actor Morgan Freeman's club located at 387 Delta Avenue in Clarksdale, Mississippi.

Having made our way aboard the Arkansas Times Bus from Little Rock, and after dining on the cuisine of the South: fried catfish and potatoes, at Dondie's White River Princess in Des Arc, myself and our merry band of approximately 40 blues stalwarts exited the bus on the corner of Third and Sharkey, right by the Delta Regional Authority in downtown Clarksdale. While musical and other acts were distributed throughout the city of just short of 18,000 people, the majority of the acts and attractions were to be found on a four-square block area. The attractions included "Monkey's Riding Dogs" and a petting zoo and I defy anyone in the Southern United States to resist that, not matter how old you are. The venues included the New Roxy, Club 2000, and the Stone Pony, as well as, the Holy Moly. Local and regional acts were plenty, showing an at least commercial reverence to the blues lore. I visited every one of them and they all were simple and humble "dives," save for Morgan Freeman's Ground Zero Blues Club, which is both well-intentioned and beside the point. If someone wants a true "roadhouse" (as my father would say) experience, I suggest they visit Merigold, Mississippi's own Po' Monkey's Lounge. This place is legit for the mere fact it has no commercial website, the one cited is part of the Mississippi Blues Trail.

The most significant performance took place late in the evening at the Delta Cinema at Number 11 Third Street. This venue was founded in the 1940s as a move theater and remains such. The movie posters on the walls were at least 10- years old and the concessions were sold by the can, not the cup, out of an ice chest. This was just the place I wanted to go.

The act appearing was the Cedric Burnside Project. Burnside is the grandson of R.L. Burnside and the son of drummer Calvin Jackson. All of these musician were purveyors of what has come to be called the "North Mississippi Hill Country Blues". The Cedric Burnside project includes Burnside on drums and vocals and guitarist Trenton Ayers (son of Earl "Little Joe" Ayers, guitarist for fellow North Mississippi bluesman Junior Kimbrough). And...that is it. Guitar/bass and drums. That seems familiar. Yes, now I remember: The White Stripes and the Black Keys. In first hearing the former, I remarked to a friend, "Why not just listen to Led Zeppelin?" Regarding the latter, I have always been neutral. The Black Keys were doing nothing more novel than being two Akron, Ohio white boys mining from that same old vein of Delta blues music. That said, what these two bands have done is, like the British Invasion, introduce America to its indigenous music, the blues. For that I am grateful. What does Burnside and Ayers bring to the conversation; heritage and dirt-road credibility.

The pair's performance was wholly unadorned. No elaborate lighting or roadie staff (the two set up their own equipment). The Delta Theater was clean, though dank and dark. If short, it was perfect for this performance. Burnside and Ayers more genuinely channeled the regional music than one million White Stripes or Black Keys ever could. The band's near two-hour set concentrated on the Cedric Burnside Project's most recent release, Descendants of Hill Country (Self Produced, 2015). The release title captures the gravity of being part of the linage that introduced and perfected the so- called North Mississippi Hill Country Blues. This music is characterized by an emphasis on percussion and a certain harmonic simplicity. The style possesses elements of the single-chord drone boogies of John Lee Hooker, as well as, the more harmonically-sophisticated songs of fellow North Mississippi native Mississippi Fred McDowell. Be certain, this is riff-oriented music where the riff and beat are king.

Burnside's drumming was intricate and polyrhythmic, his vocals earnest and authentic. Ayers guitar playing is raw and accomplished, both his standard and slide guitar playing. The effect is dense and swampy music with a determined fecund and dangerous momentum. From this miasma of sound, hurling through 80 years of shellac, vinyl, magnetic tape, and digitally-applied electrons are the strains of "My Black Mama," "The Traveling Riverside Blues," and "Crossroads." We are never far from it. 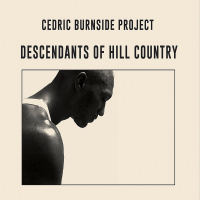 Foremost among the fine acts performing at the Festival was a bit of Mississippi blues royalty, drummer, singer, composer Cedric Burnside. He performs in a duet with guitarist Trenton Ayers, the two comprising the Cedric Burnside Project. The baker's dozen of original compositions presented here have an immediate and visceral impact. The opening "Born With It" regales Burnside's and Ayer's roots propelled on top of Ayers' overdriven guitar and Burnsides complex percussion, introducing this new evolution of the blues. "Hard Times" continues this vein of evolution over a sinewy slide guitar vamp laid down by Ayers. "Don't Shoot the Dice" has a relentless funk vibe that infectiously contagious. Ayers adopts a slinky, thin tone that puts the "F" in Funk. "Going Away Baby" walks back the funk of "Don't Shoot the Dice" to its logical beginnings in the echoes of "Crossroad" and "Baby Please Don't Go." "This is for the Soldiers" splits the difference between the two influences to forge a new, driving sound in the evolution of North Mississippi blues. "Down in the Delta" recalls "Travelin' Riverside Blues" so potently that we can all be assured that this next generation of blues artists will be proper keepers of the flame.