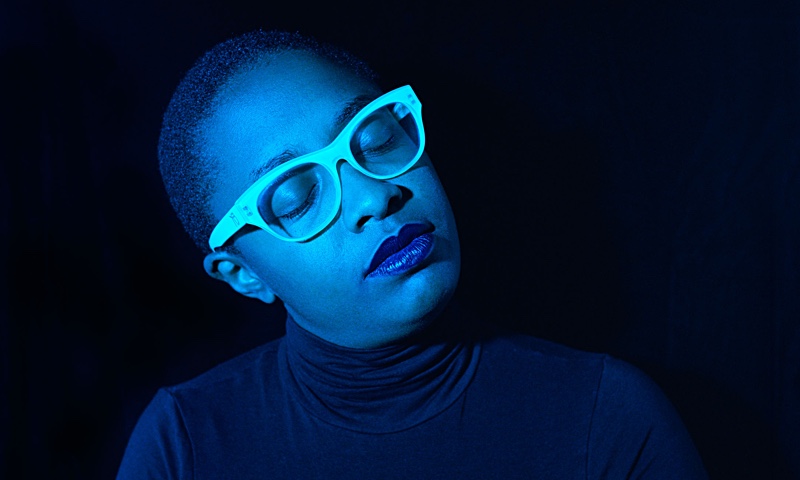 Cecile McLorin Salvant with the Aaron Diehl Trio. Two acts for the price of one? Two different artists welded together for the sake of a concert? Hardly. Salvant has been performing with Diehl and his trio for some time, not only in concert, but in the recording studio as well. Friday night at Dazzle, they played as one cohesive unit; a single throbbing, swinging organism.

Actually, Diehl has been backing Salvant since her first major label album, WomanChild (Mack Avenue, 2013), but he has also pursued his own solo career during that same time. In fact, Diehl performed a solo piano concert the prior evening at Dazzle. Once the full quartet assembled Friday night, they locked in for two sets of wide ranging material that spanned jazz standards, the blues, Broadway show tunes and even dipped into the classical arena.

Although Salvant, 28, started her jazz career focusing primarily on the jazz standards, she quickly started to exhume and revivify obscure ditties from decades past and even more than a century ago. A good example was "Sam Jones' Blues," one that Bessie Smith recorded in the 1920s. Its satirical lyrics about the return of a philandering husband showed Salvant's playful side. "Nobody" goes back to 1905 and was part of the Broadway show "Abyssinia." "I Wish I Could Shimmy Like My Sister Kate" was another humorous excursion, this time back to 1919. "Wives and Lovers" was a Burt Bacharach/Hal David song from the 1960s about how women must be sexy for their husbands lest they fly the coop with another woman. Salvant's take was far from serious and far more satirical.

Salvant is a singer in complete control of her instrument. She has the range, the articulation, the clarity and the power of the best of the jazz singers. Often, she sounded like a little girl, but then brought the hammer down as an assertive woman. On more than one occasion, she seemed to hit a note that was a bit flat. However, given her accuracy, it was apparent that it was a deliberate effect to catch the audience off guard, add a little spice, perhaps challenge the listener. Kind of like her inclusion of Big Bill Broonzy's "Black, Brown and White" for a predominantly white audience. The chorus goes something like this: "If you white/It'd be alright/If you brown/Better stick around/But as you black/Get back, get back, get back." It was all delivered with a smile. So she pulled it off; judging from the applause in response to that tune.

Salvant studied classical piano as a child as well as classical voice before jazz turned her head and career path. Nevertheless, the classical influence was apparent throughout Friday evening's two sets. She included "Somehow/Never Could Believe" from the opera "Street Scene," music by Kurt Weill, lyrics by Langston Hughes. Leonard Bernstein had two writing credits for "Glitter and Be Gay" from the operetta Candide and "Something's Coming" from West Side Story.

Like Salvant, Diehl, 32, started out on the classical side and later turned to jazz. The similar background makes him a sympathetic collaborator, not only with the song selection and performance, but all the way down to his accompaniment and soloing. He displayed a sophisticated and erudite approach to the piano. His frequent solos ranged far and wide stylistically and were often studies in contrasts. For instance, he would sometimes slather on powerful two handed chords followed by a simple single note run with the left hand laying out. He, too, had a playful side throwing in quotes from things like "Star Wars."

A highlight of the evening was the closer of the first set, the Willie Dixon blues standard "Spoonful." It started with Diehl happily playing some major key riffs which were, of course, in contrast to the minor key bluesiness of the song. Salvant began by lingering on the line "Men lie." After the editorial comments, she and the band dug into the guts of the song, building the drama and intensity as it went on.

Salvant's stage presence reflected the Broadway material. She favored dramatic arm flourishes and spent a good part of the evening smiling. The selection of "I'm All Smiles" from a 1965 Broadway musical called "The Yearling" was no accident. Throughout the evening, she wore her trademark pink, thick rimmed glasses which sometimes seemed like a mask. Presumably they help her see, but they clearly give her a "look."

In September, Salvant released her fourth album, a double CD entitled Dreams and Daggers and the band played over a half dozen tunes from that release. It was recorded live at the Village Vanguard about a year ago and featured the same band that appeared at Dazzle Friday night including Diehl and bassist Paul Sikivie. The exception was Kyle Poole who replaced Lawrence Leathers on the drums. Even though Pool was somewhat new to the band, he meshed with the others, obviously enjoying himself and smiling nearly as much as the front woman. The band had obviously played most of the selections multiple times in the past, but their interaction and just plain fun was apparent both in watching their nods and winks to each other and also in their seamless musical integration.

Salvant's first Mack Avenue album was nominated for a Grammy and her second one,