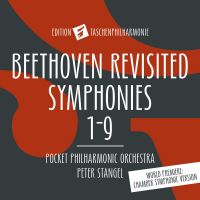 One thing that can be bragged on regarding Beethoven's nine symphonies is their artistic durability and persistence. As the pinnacle of Western Musical thought, we might not expect any less of this music, seemingly forged in humanity's collective unconscious, as well as possibly encoded in our spiritual genome. This orchestral music has endured a variety of musical translations, including reduction to piano transcriptions by Franz Liszt and full re-orchestrations by Gustav Mahler. Richard Wagner even tinkered with the Ninth, doubling the woodwinds passages. I believe that addressing Beethoven this way is not only permissible but necessary. These reinterpretations of the symphonic corpus have served to reveal new or previously unrealized facets of the music.

Liszt's piano transcriptions of the symphonies stand in performance and recording almost equal to the symphonic versions. They are the titanic epoch of Liszt's genius and musicality. I have always heard them as the skeletal representation of Beethoven, his x-ray essence. These reductions reveal much about Beethoven's thinking and approach. These performances provide an opportunity for the listener to walk within the compositions like walking within a winter forest of leafless trees. The musical trunk and limbs are the essential architecture. In contrast, Wagner and Mahler sought to magnify some of the most prominent musical storytellers in Beethoven's composing, the winds, specifically the oboe, which has been considered one of the more important manifestations of the composer's intentions. The original compositions do not suffer from these interpretations, rather, our understanding of them is further enhanced by them.

Now, a happy medium is introduced between the starkness of the piano transcriptions and the sonic surge of the reorchestrations. Anointed "the smallest symphony orchestra in the world," the Munich-based Taschenphilharmonie ("Pocket Orchestra") led by conductor Peter Stangel, employs between 12 and 19 musicians, typically one for each instrument: flute, oboe, clarinet, bassoon, horn, harp, percussion and string quintet. By comparison, a full symphony orchestra typically includes up to 75 to 100 players. As with trumpeter Miles Davis's classic 1949 Nonet, who recorded the Birth of the Cool sides, the Pocket Orchestra size allows the audience to see each musician and hear each instrument clearly. Each note becomes important, and listeners hear things that can otherwise be drowned out in a large orchestra performance.

With this mandate in mind, Stangel and company take the mighty Nine as arranged by Stangel to a great and pleasing effect. Conventional wisdom directs that Beethoven is best heard performed by a large modern orchestra (preferably the Berlin Philharmonic or Vienna Philharmonic Orchestras). This wisdom was challenged in the 1980s by the period instrument/performance movement with mixed result until the technology could catch up in the 2000s, where these smaller instrumental forces could be captured and presented sonically with the orchestra using period appropriate cat-gut strings on period instruments and valveless, natural horns (not to mention period tympani). The result of this was a historically informed and often sparkling fresh vision of Beethoven's symphonies that retained the fingerprints of Haydn and Mozart.

Conductor Stangel has arranged and conducted the symphonies with an eye on highlighting individual instrument groups as presented by a single, solo instrument. This effect is heart at its earliest in the First Symphony's second movement, marked Andante cantabile con moto, where a single violin introduces the movement, offering a fresh, chamber treatment of the most classical of Beethoven's compositions. This same reduction in forces makes the Allegro con brio opening of the "Eroica" (and the Fifth, for that matter) crackle and pop with energy and exuberance. This same approach cleans up the often muddy first movement of the Sixth Symphony, presenting Beethoven's program with greater clarity and spirit. The pastoral environment of the second movement is engaged in stark relief compared to larger orchestral settings. Regarding the fourth movement—there may not be a better or more scintillating thunderstorm on record.

The overt personality of the Seventh Symphony is illustrated in the tempos chosen my Stangel. The first movement is taken at a fast clip as evidenced by a 10:32 duration (compared with 13:36 from the touchtone Carlos Kleiber reading with the Vienna Philharmonic Orchestra (Deutsche Gramophone, 1976). The monumental second movement, Wagner's "apotheosis of dance," retains it funereal character while embracing Wagner's vision of it. This Seventh is revealing; the Pocket Orchestra's Ninth Symphony, however, is revelatory. Stangel's brisk tempos move the enormous piece along seamlessly while at the same time showing off the piece's exquisite musical wares. Powerful is the Finale, with its powerful soloists and chorus. I would make the argument that this cycle is one to start with before moving to the larger orchestras, be they modern-or period-inclined. No matter what, this is a Beethoven Symphony Cycle that stands erect and visible among a sea of them.