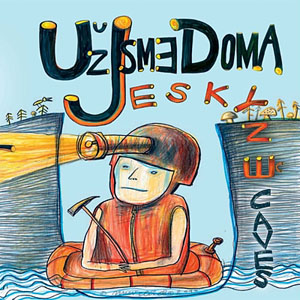 Uz Jsme Doma, (pronounced oosh-smeh-dough-ma), hails from the Czech Republic, and may not be a familiar entity for USA progressive-rock advocates. With its origins in 1985, the unit evaded bans against free expressionism during the Communist-dominated era of Eastern Europe. Now, with its seventh release and debut for Cuneiform Records, amid some glowing press in the States, they may loom as an imminent force to global progressive-rock factions.

Loose comparisons to Frank Zappa and The Residents have been cited, however, the quartet renders a personalized modality in concert with its precision-oriented stylizations. Trumpeter Adam Tomasek is a differentiator as the band melds Eastern European folk into the grand schematic.

"Fascination" is a prominent sample of the group's energized gait. Enlivened by Tomasek's triumphantly spiraling lines and the rhythm section's pumping cadences, it translates into a power-packed motif, subsided by a passionate vocal passage and a whispery theme that quietly fades during the finale.

"Fascination," is embedded with a multicolored panorama, teeming with impact. Endearingly melodic, yet hard-edged, Uz Jsme Doma strikes a near flawless balance, driven by tuneful passages and multicultural contexts.