By ROKAS KUCINSKAS
August 20, 2016
Sign in to view read count 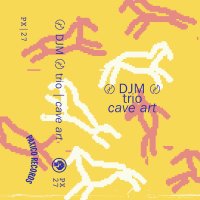 Dominic J Marshall is a pianist, composer, and aspiring electronic music artist. The Leeds College of Music and Conservatorium van Amsterdam graduate is best known for his piano trios in Netherlands and United Kingdom, where he mostly performs. His past releases, with the exception of his electronic music, are rooted in contemporary jazz piano tradition: technical, harmonically and rhythmically challenging music, which is mostly based on thematic improvisations. Cave Art is different. Perhaps so different that it is everything but the things that constituted Marshall's previous releases.

Firstly, it isn't even an album—it's a tape. Hence, it should be addressed as such. Released on a cassette tape by Paxico Records, Cave Art already brings an excitement just because of its format; getting my hands on the tape even made me dust off my first Sony Walkman.

Compared to Marshall's previous releases, music on this tape sounds unpolished, and while the title Cave Art might suggest so, music tracks are indeed static, short, and solo improvisation is minimal. The feel of grittiness is somehow further enhanced by the damp sound of the recording, as if that grey space between high and low fidelity is being explored. Nonetheless, it sounds as if it should, considering that Cave Art consist of various tracks created by different hip-hop producers (e.g. J Dilla, Pete Rock, Flying Lotus, etc.); only "Shapes" is the band's original. No wonder overall sonic texture of the tape reflects an old hip-hop recordings' vibe.

Marshall admits that the idea to record a piano trio playing various hip-hop instrumentals wasn't his; the label liked his previous works and suggested to write arrangements for different hip-hop themes covering as many artists as possible. The recording of the tape was spontaneous and resembles Miles Davis' Kind of Blue, as the arrangements written by Marshall reached musicians only hours prior to the recording session. Yet, just as Davis' masterpiece, Cave Art doesn't seem to suffer from the lack of preparation, although Marshall best describes it as an experiment that presented itself as an opportunity.

The hard copy of the tape comes with a candle attached to its side. Why a candle? "So you don't get lost in the cave. It might be dark in there," replies Marshall, affirming that similar experiments are in his future plans.