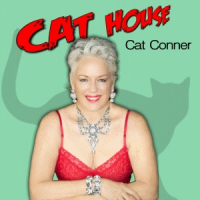 On Cat House, the follow-up to her superb debut album, Cat Tales, California-based vocalist Cat Conner shows again that she has the astuteness and chops to leave many other contemporary jazz vocalists floundering in her wake and gasping for air. This time around, Conner has chosen a baker's dozen of what she calls her "lucky tunes," and she gives each one the sort of eloquent reading that should entice the perceptive listener to revisit them time and again.

While on ballads there's an occasional hint of Jeri Southern in Conner's sultry voice and delivery, there's no point in making comparisons, as Conner's personality and intonation are distinctly her own. She has also mastered Rule No. 1 in producing a captivating vocal album: that is, to surround the headliner with the finest musicians in the neighborhood. On Cat House they include pianist Tom Ranier, bassist Chuck Berghofer, drummer Joe La Barbera and (on various numbers) guitarist (and arranger) John Chiodini, woodwind specialist Gene Cipriano, trumpeter Ron Stout, trombonist Dick Nash, French hornist Stephanie O'Keefe and handyman Bob Carr (bassoon, bass clarinet, alto flute).

The vibrant opener, Cole Porter's "Everything I Love," is deftly blended with a more spontaneous lyric, "Everything I Desire," a semi-scat riff by Chiodini on which Conner ad libs freely. The mood is more pensive on Billy Strayhorn's "Pretty Girl," transposed by Conner into "Handsome Man," which precedes the nebulous "Sans Souci" (lyric by Peggy Lee) and John Coltrane's jazz classic "Giant Steps" (lyric by Meredith d'Ambrosio and Ron Hurston). Michael Wayne Deese' "Throw Me Away" and Jerome Kern / Dorothy Fields' "Remind Me" are seldom-heard gems given new luster by Conner who also brings out the best in Hoagy Carmichael's incisive "Baltimore Oriole," Alan Broadbent's rhythmic "Heart's Desire" (lyric by Dave Frishberg) and D'Ambrosio's even-tempered "Wishing on the Moon." If the lyrics aren't always delovely, in Conner's able hands they are at least coherent.

After a measured introductory verse, the pace quickens on the standard "You're Driving Me Crazy" and the Billie Holiday favorite, "What a Little Moonlight Can Do," which are sandwiched around Sammy Cahn / Jimmy van Heusen's suggestive "Come on Strong." While the finale, "People Say (Song for Rob)," is some steps removed from memorable, it is clearly sung from the heart, as Conner expresses the abiding love she has for her son, whom she unwillingly gave up for adoption before reuniting with him many years later. Quite a poignant finish to a second splendid album by the virtuosic Cat Conner.

Everything I Love/Everything I Desire; Handsome Man (Pretty Girl); Sans Souci; Giant Steps; Throw Me Away; Remind Me; Baltimore Oriole; Heart’s Desire; Wishing on the Moon; You’re Driving Me Crazy; Come on Strong; What a Little Moonlight Can Do; People Say.