By JEFF DAYTON-JOHNSON
December 16, 2012
Sign in to view read count 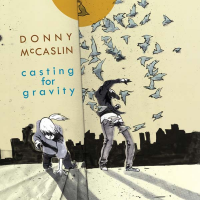 Tenor saxophonist Donny McCaslin has bravely developed a uniquely personal sound that proudly claims its heritage in the long mainstream of jazz, yet sounds freshly innovative. He has released eleven albums under his leadership, among which Recommended Tools (Greenleaf, 2008), with its punishing, revealing trio format, was a high-water mark. McCaslin deploys sheets-of-sound density inherited from saxophonist John Coltrane, together with an inventive approach to rhythm and the placement of notes. This latter characteristic can sometimes resemble the playing of saxophonist Chris Potter, a resemblance brought into clearer focus on this heavily electric album.

And Casting for Gravity is a very electric record. If Perpetual Motion (Greenleaf, 2011) signaled the introduction of electric keyboards and bass, it evolved organically out of McCaslin's exemplary acoustic work. Eyebrows were not raised. "Going electric" may not be nearly as controversial as it was in Bob Dylan's day, but Casting for Gravity will raise eyebrows—and thumbs.

McCaslin has made much of the influence of electronica producer Aphex Twin, of dub reggae, and of Headhunters bassist Paul Jackson in the compositions and performances on this record (certainly not influences that were immediately apparent on the earlier records). Casting for gravity, indeed. So there are surging electric guitar-like slabs of sound on "Says Who," breezy reverb-rich, Augustus Pablo-like melodica on "Alpha and Omega" (from the Boards of Canada songbook), and pile-driving bass notes on "Tension." Very unlike the records that came before. The combination comes out sounding something like the orchestral keyboards of Joe Zawinul in Weather Report—which is a good thing. Mentor and producer David Binney's "Praia Grande" even brings out a Wayne Shorter-like beauty in McCaslin's playing.

Bassist Tim Lefebvre and drummer Mark Guiliana were in the Perpetual Motion band, but sound like entirely different players in this more resolutely electric setting. Multi-keyboardist Jason Lindner is the true author of the sound on the record, providing a mix of electronic textures (and some beautiful acoustic playing on "Love Song for an Echo").

The key concern: Does McCaslin's remarkable saxophone voice get lost in the newly tumultuous mix? It does not. Casting for Gravity provides a different context, a re-imagined platform for appreciating McCaslin's intensity. He sounds different than he does against the intimate acoustic trio of Recommended Tools, and some harmonic nuances are perhaps steamrollered by the powerful wall of sound, but the rhythmic ingenuity of his playing is cast in a new light.