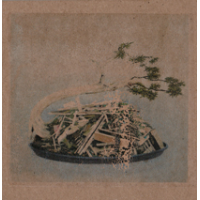 Casa Corp is the second release by the Buenos Aires-based trio of Argentine trumpeter Leonel Kaplan, Chilean alto saxophonist Edén Carrasco, and Austrian vocalist Christof Kurzmann. It follows Una Casa / Observatorio (2011), on Kaplan's own Three Chairs Recordings label. Kaplan and Carrasco were also on the Dromos label's first release in 2009, Moments of Falling Petals, in a trio completed by guitarist Tetuzi Akiyama. In common with all releases on Dromos, Casa Corp is released in a limited edition, each one housed in a unique sleeve featuring an original piece of art work, in this case a print of an original oil painting made by American artist Thuy-Van Vu.

The music consists of one 33-minute track recorded in December, 2011 at Buenos Aires' Casa Co. It opens so quietly that it might appear that there's a sound system malfunction; only after two minutes have elapsed are any kind of sounds detectable—the most minimal traces of breathing, passing through instruments, coupled with electronic noise. This opening effectively functions as a Cageian silence, only being broken (just before the 4' 33" mark, incidentally) by Kurzmann's voice intoning "The Red Flag," accompanied by textural sounds—more breath, and key popping from Carrasco and Kaplan. As always, Kurzmann's instantly recognizable vocals are stylized but extremely affecting in a well-matched combination of voice, electronics and instrumental sounds.

After the vocals end, the piece continues as a three-way improvisation in which the trumpet and saxophone intersperse conventional notes with breathy sounds, combining with Kurzmann's electronic tones into an atmospheric soundscape rich in detail and depth. Some five minutes from the end, Kurzmann reprises his vocal performance of "The Red Flag" before a final coda of silence brings the piece to a satisfyingly symmetrical close. As a whole, Casa Corp is well-constructed and equally well-performed, the kind of piece that will handsomely repay repeated listening.