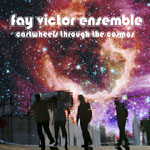 Fay Victor marks an impressive presence on Cartwheels Through the Cosmos as she comes up with an arresting amalgam of songs. Victor neither caters to the norm nor does she slot herself. Instead, she soars free and often beautifully as her phrasing finds a comfort zone in jazz harmony. Her sense of improvisation is another asset; she can take a song and turn it around on different rhythmic landscapes.

Victor is now a presence in New York, but she had a long stay in Amsterdam, where she performed at the Bimhaus, documented on the live recording Lazy Old Sun: Live/Life in the Lowlands (Greene Ave, 2004). The Dutch jazz scene is vibrant and adds a large dose of flavour and excitement to the music. Apparently, some of that has also rubbed off on Victor.

Victor brings a soft allure to "Stray Dogs, which has a political undertone. She underscores the dark lyrics with a gentility that underscores the potency of the words. She gets some fine support from drummer Michael "TA" Thompson, who shades the tune with gentle accents and guitarist Anders Nilsson, who adds a luminous bridge. Victor goes upbeat on "Leap of Faith, a sparkler, her singing buoyant yet not without a firm grasp of jazz phrasing. The instrumental section veers off course as Nilsson slowly moves into hard rock territory. Nevertheless, the blend is cohesive.

The mood on "Pillow on My Ear is expansive. The buildup comes on the grate of the bass, the strings strangulated before soft bowing ushers Victor in. Her vocals are haunting and create a compelling mood, first in tandem with Filiano and then with Nilsson. In the unhurried space of time, Filiano and Nilsson make it all the more atmospheric and edgy, exchanging ideas and weaving textures.

Leap of Faith; Exchange Rate; It