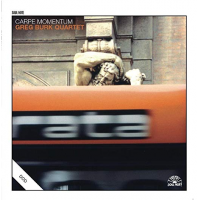 Greg Burk's work may have a quirk, but there is much more to it. He looks to the skies and he looks to his wife, and he even looks to George Russell for inspiration. And all of the fun of meeting more than one is evidenced on this album as the music spins into several spheres and never loses its bearings. And if that makes the writing remarkable, also bringing it all together is this cohesive band of four.

Time is of the essence. Only it does not follow an expected pattern constantly. It can set a standard pulse and then disseminate on the beat. Or it can set the flow going in a sweet melody, as it does on "Hymn For Her," which is essayed by Jerry Bergonzi on the tenor, his lines undulating most becomingly clasping the melody to the soul. Burk opens it out a little on his first solo stint, and having done that, he nestles into a more compact melodic groove when he comes back. Burk's wife appears on the telephone-inspired "Serena Al Telefono." Jonathan Robinson sets up the beat on the bass, which is extended by Burk, the resolution modulate and flowing when in comes Bergonzi and cleaves between the two on the soprano sax. From then on disparate harmonies vent their way, time is fractured and Burk's attacks rumble and gradually rise to a swell. Add Bergonzi's repeated motifs and Gerald Cleaver's shifting timbres on the snares and his evolving sense of timing, and this tune becomes irresistible. What comes up, "For George Russell," is an up-tempo tune. The hue is radiant, livened by the lilting romp of Burk and then etched by the drive of Bergonzi on the tenor.

With plenty of depth and flair, this is a darn good record.