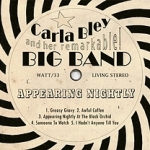 Bandleader and musical provocateur Carla Bley is the Hector Berlioz of jazz. Her command of her large ensembles is complete and potent. Her composition, arrangement, and adaptation are intelligent with a sophisticated sense of humor. A superb pianist, Bley's true talent lies in her ability to define and then guide an orchestra through her arrangements without veering off into parts unknown. Her relationship with big bands is long lived, beginning in the late 1960s, including the recordings Looking For America (ECM, 2003), The Carla Bley Big Band Goes to Church (ECM, 1996), Big Band Theory (ECM, 1993), and The Very Big Carla Bley Band (ECM, 1990).

The section begins with an eccentric Bley survey of jazz piano literature. The solo piano opening is a dead ringer for “My Foolish Heart” with interpolations of “As time Goes By.” This abruptly gives way to a bassist Steve Swallow-drummer Billy Drummond duet soon interrupted by a Bley hallmark: low brass and reeds weaving in and out as if tuning and in the process building toward a consonant crescendo that leads into a spontaneous tenor saxophone counterpoint and riffs, just as if the listener had walked in the door mid-tune. From there, the concert is in full swing.

Section 2: “Second Round” musically details the evening in full swing with low brass conversation dominated by a lengthy trombone solo, both Bley touchtones. Bley likes the rasp of muted and full bell 'bones and allows her collaborators full reign. This is followed by a more full-throated tenor saxophone solo that brings the section to a silent end. Section 3: “What Would You Like to Here” takes on a 1930s Duke Ellington ambiance with a plunger muted trumpet solo delivered over the plush bed of the full horn section and then, Bley's piano, which flows into her own solo.

Section 4: “Last Call” closes the suite on an upbeat note. Swallow further reveals his importance to the Bley big band sound with his high-register playing. More raspy trombone peppers the piece over muted, then open-bell brass, propels the piece to its conclusion. The suite is slightly palandromic, recalling motifs from Section 1 as the solo instruments are given eight bars alternating into a quote-heavy coda.

”Aweful Coffee” sports a Julian Argüelles baritone saxophone solo that meanders all over the map, introducing the piece. It is also a tunefest with quotes from “Salt Peanuts,” “You're the Cream in My Coffee,” “Watermelon Man,” “Life is Just a Bowl of Cherries,” “Hey Pete, Let's Eat More Meat,” and “Tea for Two” (note all having a food motif). “Greasy Gravy” slows down the tempo to a strut again featuring low reeds and brass in solos before Bley takes things for a spin herself. Bley mixes old and new arrangement forms on “I Ain't Had Nyone Till You” and “Someone to Watch,” quoting the Great American Songbook liberally and intelligently.

Comparisons of Bley's big band talents to Ellington and Charles Mingus are not hyperbole. In a field crowded with every measure of big bands, Carla Bley's Big Band stands as one of the most inventive and unique ensembles.

Tracks: Greasy Gravy; Aweful Coffee; Appearing Nightly At The Black Orchid; Someone To Watch; I Hadn't Anyone Till You.

Greasy Gravy; Awful Coffee; Appearing Nightly at the Black Orchid: 40 On/20 Off, Second Round, What Would You Like to Hear?, Last Call; Someone to Watch; I Hadn't Anyone 'Till You.