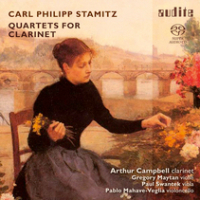 Beneath the veneer of the "great composers"—Bach, Mozart and Beethoven—lay a wealth of talent that was composed at the same time, often competing with what history has deemed its betters. It would be easy to consign the clarinet music of the latter half of the Eighteenth Century to Mozart, whose "Clarinet Concerto in Am, K622" and "Clarinet Quintet in Am, K581" have never left the performance repertoire. But thinking this would be at the expense of a large number of fine composers for the clarinet from the same period, including Franz Krommer (1959- 1831); Ludwig Spohr (1794-1859); Antonio Cartellieri (1772-1807); Michel Yost (1754-1786); Carl Maria Von Weber (1786-1826); and Johann Molter (1696-1765), composing some of the first clarinet concertos.

Looming large among these contemporaries of Mozart was the Mannheim School of composers. It was from this group that the familiar compositional techniques know as the "Mannheim Steamroller" (an extended crescendo passage typically having a rising melodic line over an ostinato bass line) and "Mannheim Rocket" (a swiftly ascending passage typically having a rising arpeggiated melodic line) were derived. The Mannheim School included the father and son team of Johann (1717-1757) and Carl (1745-1801) Stamitz, both of whom excelled in clarinet composition of an exceptionally fine quality.

Carl Stamitz composed eleven clarinet concertos and numerous chamber pieces with clarinet. On clarinetist Arthur Campbell's Quartets for Clarinet, he surveys Stamitz's "Op. 19 Nos. 1-3" and "Op. 8 No.4" quartets. These pieces fairly represent the state-of-the-art of clarinet chamber music for the period. All the pieces are nominally composed in the sonata form, with brisk "allegros" and kitchen-warm slow ("andante") second movements with lively codas. This may be universally the sunniest music composed of the period, and there is not a low spot in the repertoire. This SACD-hybrid recording has brilliant sonic fidelity that does not sacrifice warmth for digital perfection, yielding readily this grandly paced music, well- dispatched by Campbell and company.