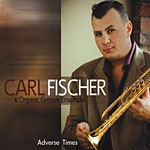 Sometimes it seems that trumpet players get more of the spotlight than other instrument-playing bandleaders. Perhaps it's because of the tremendous legacy emanating from Louis Armstrong's tree. The nature of the trumpet speaks of leadership, bravura and high-wire-no-net playing. Yet it can be an enormous challenge for a trumpeter and bandleader in 2010 to stand out from the burgeoning pack—Wynton Marsalis, Sean Jones, Nicholas Payton and Roy Hargrove, among many, and variegated, others.

Adverse Times is a breakthrough disc for Carl Fischer and his fine B3 organ-ized group, Organic Groove Ensemble. Fischer—a mainstay of the Billy Joel touring ensemble and former featured soloist with Maynard Ferguson—steps us admirably and throws his name into the talent-rich ring. With this album, he shows that he belongs.

Fischer's effort is a highly eclectic array of tunes that cover the gamut from hard funk-rock ("Weinheim Blues" and "Open Up"), Miles Davis-flavored jazz ("TuTu"), Billy Joel classics ("Downeaster Alexa" and "Elegy for the Fisherman"), and on to Indian-flavored world music. There are also two fine vocal tunes ("Movin Out and On" and "Freeport to Fire Island"), which stylistically might have been recorded by Stevie Wonder. As nice as they are, the vocal selections are overshadowed by the instrumental cuts.

But rest assured, Adverse Times is not a bland, something-for-everyone affair. There's no straight-ahead bebop. Instead, Fischer seems to be nodding respectfully to all of his mentors and prior musical lives—from Nat Adderley and Miles Davis to Blood, Sweat and Tears.

The musicianship from Fischer and his cohorts (some of whom are drawn from his Ferguson and Billy Joel endeavors) is outstanding. Tenor and soprano saxophonist John Scarpulla is a perfect jazz-funk foil for Fischer, spilling out hard-bitten ensemble lines and well-developed solos. Guitarist Jay Azzolina shines throughout, offering solid riffs and responses and exciting solos. Trombonist Ozzie Melendez plays with a gorgeous give-us-more sound. Never stepping on toes, organist and multi-keyboardist Ron Oswanski lays down fine comps, spots and spits behind both ensemble and soloists. Drummer Brian Wolfe drives hard and percussionist Emiliano Valerio spices all when involved in the mix. Organic Groove Ensemble does as its name implies.

Fischer's trumpet and flugelhorn sound is as inviting as warm butter and, when he forays into the altissimo realm, as he does frequently, projects a fat, full sound reminiscent of Maynard Ferguson. Fischer is cautious, however, not to burn up his screaming fuel and bore with playing-for-other-trumpet-players' ears pyrotechnics. He combines musical maturity with youthful, fire-like energy, and his solos develop coherently, only very rarely falling back on licks. He's done his listening-to-the-masters time in the shed and it shows beautifully.

Probably the biggest surprise is Fischer's superb composing skill on "Kirican Afternoon" and "Flo n Mayn Spirit." He delivers six stylized originals, each with shades of his mentors but each standing solidly on its own. A gifted writer and arranger, there's a dimension in Fischer's compositions similar to Marsalis' that he could leverage further.

The production values are first class. Co-producer Dan Zank and the recording, engineering and mastering team have produced a magnificent recording.

While Adverse Times might allude to difficult and complex roads in life, based upon this superb performance, Carl Fischer & Organic Groove Ensemble is in for clear, smooth and very successful sailing. All aboard that's going aboard.