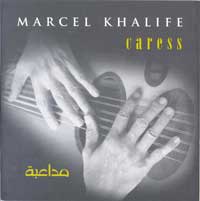 There may not be any words to be found on Marcel Khalifé's latest virtuoso celebration of the oud (the Arabic lute pictured on the cover), but Caress (Muda'aba) does an elegant job in using the universal language of music to convey the maestro's exuberance, contemplation, and passion. The compositions range from pensive to rollicking, sometimes within the same piece, never really settling down into a single mode or groove. Khalifé integrates Western compositional ideas and a conversational feel within an Arabic music context.

The Lebanese native (now a resident of Paris) first garnered attention three decades ago for his solo oud performances, but he's expanded his sound through the years to include choral music, dance, soundtracks, and orchestral music. Now on or about his 20th release as a leader, Khalifé has made a point of stretching the boundaries of oud performance and lyrical composition, prominently featuring contemporary poets like Mahmoud Darwish in new adaptations of Arabic song, for example.

For Caress, Marcel Khalifé is joined by the Al Mayadine Quartet, an ensemble he has maintained in various forms since 1976. It features his sons Rami (a recent Julliard graduate) on piano and Bachar (a student at the National Superior Conservatory in Paris) on percussion and vibraphone, as well as Peter Herbert on bass. Omar Guey steps in on solo violin on one track, "Chaza," toward the end.

When the musicians get into full swing on the opening "Caress," they keep the pulse simmering and the pace upbeat. You might just find yourself humming along with the catchy minor melody. The flexible interplay between oud, bass, and percussion carries with it the focused intent, but not the rigidity, of chamber music. Bachar Khalifé's entry on the vibes translates his otherwise active hand drumming into a melodic context, offering a ringing tonal alternative to the strings. "Al Hambra" segues seamlessly into "Granada," which opens with dramatic, spacious, and sober oud playing, then moving back and forth between gliding and picking, referring occasionally to flamenco guitar idioms.

Notable oud playing can be found on the insistently minor-key "Tents" and the more romantic (and eventually festive) "Popular Cafe," with enough variation among the other instruments to keep things reasonably unpredictable. The unfortunate piano piece "With All the Love" makes cliche references to "Happy Birthday"; just hit fast forward and it's history. The closing two pieces are fresh and crisp, making use of interactive, conversational construction to keep things bubbling along.

If you're curious about how these crystalline performances translate into live action, Khalifé regularly takes his act on the road, and there's still time to catch the tail end of his fall 2004 American tour .

Visit Marcel Khalifé on the web for sound samples and more.