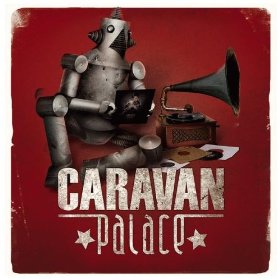 Caravan Palace is a Paris-based sextet which, augmented on its debut album by seven guest musicians, is propelling manouche (French Gypsy jazz) into the digital age. It is to the genre something like the Gotan Project is to tango, but without the dark corners. Live, as AAJ reviewers have noted, Caravan Palace is big fun, heavy on the dry ice and with more lighting-state changes than Diana Ross (well, not literally more than Ross, but you get the idea).

Caravan Palace the album is big fun too. The group's take on manouche is rooted in the zazou phenomenon of late 1930s and early 1940s Paris, when long-haired, sartorially extravagant twenty-somethings (zazous) gathered around a swing style which was equal parts guitarist Django Reinhardt, violinist Stephane Grappelli and bandleader and singer Cab Calloway. Caravan Palace's recreation of the style is true to this original blueprint, capturing its lust for life and, at times, maniacal energy, but throws DIY electro, house, dub and hip-hop into the mix.

Tempos range from fast to berserk, and there is plenty of spirited improvisation, from bassist Charles Delaporte, violinist Hughes Payen, guitarist Arnaud Vial, clarinetists Camille "Chapi" Chapelliere and Yom, and trombonist Antoine Toustou. The group's core trio—Delaporte, Payen and Vial—are inventive programmers; their digital effects are occasionally over-egged, but are in the main used sparingly. Singer Colotis Zoe, a winning mix of Calloway, Eartha Kitt and Anita O'Day, fronts a handful of tracks. All the lyrics are in English.

Released in 2010 on the French Café De La Danse label, Caravan Palace has now been picked up by Britain's Wrasse Records—who may have a big summer seller on its hands. 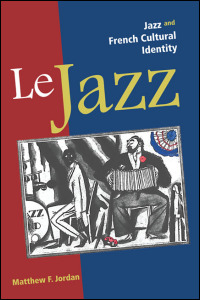 The origins of zazou, as a sartorial and social phenomenon, are examined in Matthew F. Jordan's fascinating book, Le Jazz: Jazz And French Cultural Identity (University Of Illinois Press, 2010). Now almost exclusively associated with the pursuit of pleasure, zazou was at its most vibrant in 1941/42 in Paris, when the city was under German occupation. Even then, zazou was about enjoying yourself, but to do so under the Nazis, to embrace jazz culture—with all its "Negro" and "Jewish" connotations—with such public flamboyance, was a courageous act. Zazous were constantly harassed by the German and Vichy authorities: arrested, jailed, vilified in the collaborationist press, and beaten up and forced to have their hair shorn in the street. They were blamed for the "decadence" of French culture and used to justify the ultra-conservative nature of Vichy society. Eventually, the authorities more or less gave up on stamping out the zazous, who had showed remarkable resilience; as armed resistance to the occupation grew in intensity, the regime's enforcers had more pressing concerns.

Jordan's book also contains a forensic examination of the politics of the French jazz scene in the 1930s, when critics became bitterly divided between traditionalists such as Hughes Panassie and the Hot Club de France establishment, and more forward looking observers, who first rallied around the journal Jazz-Tango. Jordan describes the posturing, petty jealousies and flailing egos of contemporary French jazz criticism to hilarious effect. (And plus ca change, as anyone familiar with modern French jazz criticism would say).

Le Jazz: Jazz And French Cultural Identity is academic in tone, but even its driest passages are worth traversing, as Jordan chronicles the process by which jazz—attacked by many French cultural commentators, right from the start, as an undesirable American import—grew to become the indelible strand of French popular culture that it is today.

Title: Caravan Palace and The Spirit of Zazou | Year Released: 2011