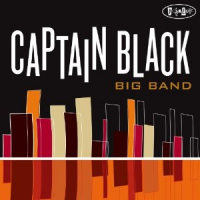 The Posi-Tone label has positioned itself as a prime purveyor of small group jazz, with artists like pianist Orrin Evans leading the way, and both parties are breaking new ground with the release of The Captain Black Big Band. After putting out dozens of small group sessions, the label has taken a bold step in a bigger direction by releasing the debut big band recording from one of jazz's rising stars. Evans' prior output for the label—his own Faith In Action (Posi-Tone, 2010) and the audacious collective efforts on Tarbaby's The End Of Fear (Posi-Tone 2010)—present an artist possessing a keen sense of balance between inside and outside ideals, and this same approach can be felt throughout this record.

The first three numbers spotlight three different composers and arrangers, which demonstrating the full breadth and depth of what this band can do. The full weight of the ensemble is used sparingly on Todd Bashore's arrangement of Ralph Peterson's "The Art Of War," and the focus really falls on Rob Landham's helium-infused alto saxophone work. The band touches on Latin grooves with Gianluca Renzi's "Here's The Captain," which features some explosive piano work from Evans, and Todd Marcus' arrangement of his own "Inheritance" demonstrates a more melodically centered form of big band writing. His bass clarinet work adds a new dimension to the sound of the band, and trumpeter Michael Walter White injects some humor into the proceedings with a "Hallelujah" quote from Handel's Messiah.

The last four tracks are penned by Evans, giving the music a certain sense of continuity, but the pieces themselves come from different points in Evans' compositional evolution, and three different arrangers put their own unique stamp on his work. Bashore arranges a pair of tunes from Captain Black (Criss Cross, 1998)—the title track, and "Big Jimmy," an album highlight where the saxophonist uses measured dissonance in the introduction and, once things start swinging, White's brawny trumpet work is as beautifully boisterous as it gets. Marcus tackles the title track from Easy Now (Criss Cross, 2005), underscoring some high-to-low voice contrasts at the outset with some rumbling drums, as the music eventually takes on a down-tempo, loose swing vibe.

Evans' own arrangement of his "Jena 6," from the Tarbaby album, is the recording's most adventurous ride. Neil Podgurski's drama-filled piano prelude, with certain disjunct sensibilities, gives way to a woozy and ominous atmosphere. Alto saxophonist Jaleel Shaw becomes the focal point, as the rhythm section coalesces into a free bop machine and the icing on the cake comes in the form of Shaw's coarse-as-can-be coda, which boils over with energy.

The Captain Black Big Band has easily earned its stripes with this self-titled debut, demonstrating another side of Evans' endlessly fascinating musical personality.