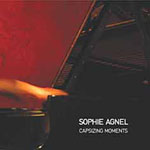 Sophie Agnel plays prepared piano, although she herself prefers to speak of "extensive piano." Her preparations evolve during the course of her playing as, inside the piano, she adds, moves or removes such objects as disposable water cups, foil ashtrays, bouncing balls and nylon fishing line.

This CD was recorded live in concert at Les Instants Chavires, near Paris in November 2008. Fortunately, the whole concert is included unedited, allowing the effect of those shifting preparations to be appreciated in context. They introduce an unpredictable element to the piano, giving the instrument a far broader range of possibilities than an unprepared piano.

At times it's possible to believe a trio is playing as percussive effects or high pitched tones join the conventional piano sound. Tellingly, the album's credits spell out the fact that Agnel used no electronics. This is necessary to counter the available aural evidence; for instance, "Capsizing Moments 2" opens with a high pitched screech that could be from a violin or soprano saxophone, and is unlike any piano tone. As it is not electronically generated, which of the preparations produced it and how is an open question.

Preparations aside, this three-part work is engaging music, with extensive passages of normal piano. The low end of the piano seems largely to have escaped preparations, judging by the sustained bass rumble that Agnel maintains for large sections of "Capsizing Moments 1," underpinning her playing elsewhere on the keyboard. The interactions between her left and right hands are captivating throughout. So, in "Capsizing Moments 2," she generates a rippling effect that is punctuated by percussive chords.

For some pianists, a section of prepared piano acts as a novelty interlude. That is never the case with Agnel. She fully integrates the preparations and they contribute to the drama and excitement of this fine music.

Sophie Agnel: solo piano, with variable preparations but no electronics.