By GLENN ASTARITA
October 30, 2008
Sign in to view read count 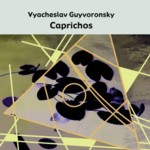 Vyacheslav Guyvoronsky is purportedly among the finest of the post-Soviet Russian progressive jazz trumpeters and as the story goes, he's paid the bills and augmented his artistry via his medical degree. On Caprichos he delves into a curiously interesting musical setting with a Russian strings section. Not quite Third Stream in a semi-literal sense, it's more about a rapidly moving sequence of classical, chamber, and jazz abstracts, enhanced by the pristine audio engineering processes that offer a dynamic soundstage.

With his soaring lines, Guyvoronsky marches the ensemble through staggered movements and intersecting flows through forty-three tracks, all prefaced by the album moniker, Caprichos. Moreover, the album title intimates Spanish artist Francisco Goya's (1746-1828) eighty paintings that illustrate the deficiencies of society. In turn, the music iterated here signifies a conglomerate of emotive aspects that span jubilance, sorrow, and austere motifs built on pizzicato, streaming choruses and more.

Abetted by the strings section buoyant unison phrasings and multilayered soloing jaunts, Guyvoronsky looms as the authoritative figure during a good portion of these adjoining mini-plots. As some of the variable tempo movements are shaded with East European-like folk musings amid passages that intimate the triumph of one's spirit.

Ultimately, the instrumentalists eclipse conventional classical mantras, largely due to intermittent fusions of ethnocentric musical notions. Yet it's not a radical departure from the norm, where the psyche might spin into a state of frenzy. Consequently, the artists weave a tale that communicates Goya's kaleidoscopic vision of life's foibles and misgivings. Here, art interpretation projects a vivid portrayal of life, thanks to Guyvoronsky's acute imaginative powers.