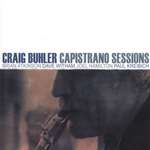 This is the first album for saxophonist/composer/bandleader Craig Buhler, who hails from the Seattle area. Since the early '70s, Buhler has also had a successful run with his rock band, Honk, as well as providing, in another phase of his musical life, Christian music.

Buhler and his quintet provide eleven original compositions that evoke what he refers to as a jazz journey along the Pacific Coast. In many ways, the music is typically West Coast and seems like a more than adequate soundtrack to accompany the sweeping vistas of the rugged views along the Pacific Coast Highway.

Buhler opens up this collection with a vibrant "Lookear" on tenor sax but is soon heard on alto, and by the following track, "Capistrano," he has also unlimbered a clarinet. Buhler's band mates share in on the fun, with an unusual doubling of instruments by Brian Atkinson who provides both trumpet and vibraphone throughout the album. Dave Witham is the pianist with bassist Joel Hamilton and drummer Paul Kreibich. The tunes echo the implied scenery with largely mid- to up-tempo enthusiasm, with a Latinized pulse provided on "Molly Ann." The use of Atkinson's vibes effectively underscore just the right touch of West Coast jazz from previous decades that adds the perfect atmosphere needed to complete the jazz picture.