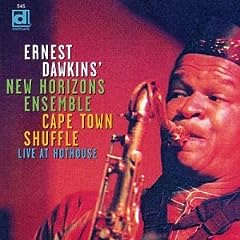 Ernest Dawkins' New Horizons Ensemble continues to give the people what they want. That is butt-shakin' blues based jazz. Like Charles Mingus recalling the field hollers, the Art Ensemble of Chicago bringing the beat straight out of Africa, and Dizzy Gillespie spinning into new heights with bebop, Dawkins stirs his listeners to get up and move.

Maybe sometime and somewhere when jazz moved from clubs to concert halls, the gesticulate aspects of the music were lost.

The New Horizons Ensemble rededicates itself to the life-affirming sounds of the African American experience. Formed ten years ago by Dawkins, the band has changed a few players, but it still retains its roots music feel. Trumpeter Ameen Muhammad and trombonist Steve Berry are true showmen in the sense of crowd pleasers. In this live setting their dramatics boost the energy skyward. The opening track, the shortest at 14 minutes, is based on a Senegalese rhythm and allows for a broad-shouldered Dawkins' saxophone attack. He conjures everyone from Coltrane to Gene Ammons here. Where the opener establishes the energy, 'Third Line And Cape Town Shuffle' joins Africa to America by way of New Orleans, with saxophone preaching replaced by Ameen Muhammad's best holy man sermon. The finest track on the date is certainly 'Dolphy And Monk Dance,' which captures the hat and beard logic of jazz's two most unique voices.

The disc ends with 'Jazz To Hip Hop.' Preaching is replaced by rapping as poet Kahari B, son of Mwata Bowden, convincingly ties the rap improvisations, bebop, and even the Lindy hoppers, as he chants 'from jazz, to hip hop, to beatbox, to bebop.' Ernest Dawkins makes a convincing argument that jazz bridges continents and most recently centuries.