By BRUCE LINDSAY
August 8, 2012
Sign in to view read count 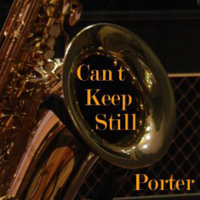 "Oh Mr. Porter, what can I do? I wanted to go to Birmingham and they've taken me on to Crewe." So went the refrain of an old Music Hall tune. Porter, a sextet from Essex in the south of England, doesn't take its name from that great old song, nor is it named for an equally old alcoholic beverage. The band is named, more pragmatically, after its leader: singer and guitarist Gary Porter. It's a workmanlike, practical, band name. The music, on the other hand, is a stylish mix of blues, ska, R&B and jazz that has the power to cheer.

Porter can trace its musical lineage back to the early years of British R&B, the period around the late '50s and early '60s that saw the rise of players like Cyril Davies, Alexis Korner, Jack Bruce and Georgie Fame. The songs on Can't Keep Still are all originals, most written by Porter himself and, while they cover familiar ground, they do so with some charm.

It's Fame's brand of stylish, jazz-inflected R&B that the band evokes most strongly thanks to the singer's melodic, light yet soulful voice and the mix of horns and keyboards. There are similarities, too, with the excellent James Hunter, who Porter has supported—the gentle swing of "Out Of My Hands," the bouncy ska beat of "Bridge Too Far" and the sweetly romantic "Emily" all share Hunter's warmth and humanity in spades.

There are some lovely musical touches on Can't Keep Still. Dave Melling's keyboard solo on "Bridge Too Far," the horn section's mellow lines on "Don't Wanna Work No More" and the pizzicato string effects on "A Little Luck" and "Emily" are just a few of these motifs, none are especially complex but they all give the songs an instant uplift. If "Emily" is the album's romantic highlight, Melling's "Riff Raff" is the irresistible dance floor filler. An instrumental with a passing resemblance to "Madness" by Madness, the horn players deliver the jaunty melody line over a straightforward but emphatic ska beat.

So, Mr. Porter, what can be done? The vagaries of the British rail network make it likely that Birmingham will never be reached. But pop on a pair of headphones, turn up the volume, play Can't Keep Still. Its neatly crafted songs, skilful musicianship and good time vibes will sound just as good in Crewe as they will in Birmingham.