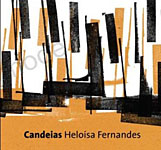 The pursuit of art is ceaseless, firstly because the artist is—to use the Latin from whence it came and it reads thus: poeta nascitur non fit. Art is, as well, an exposition of life as it tumbles upon the world, this way and that. However, for the artist there is another raison d'être. The impulse to adorn, to make art—poetry, music, painting, and even architecture—is first revealed in the soul. Its nature is especially innate in the artist, so amorphous and elastic that it is difficult to predict the outcome. The artist then becomes inspired to channel the impulse and give his or her art form. This is quite a sojourn, especially where cultures collide and. like meteors. must be left sometimes to cool for hundreds of years.

Fortunately, artists and historians often are alter egos and sometimes make strange bedfellows—even if they lived years apart. Pianist Heloísa Fernandes lived almost five decades apart from Mario de Andrade, but on Candeias their lives intersect, and the music they love and seek to see comes alive in such a way as to preserve its history and origins, as well as put it in the context of today. De Andrade is a genius anthropologist, sociologist, poet and musician from Sao Paolo who led a historic expedition in 1938 to document the music of Afro Brazil and the Amerindians of Pernambuco, Parafba, Ceara, Piaui and Maranhao. Now Fernandes has followed his example, albeit spiritually and figuratively as well.

After immersing herself in De Andrade's documentation, for Candeias Fernandes chose some of the traditional forms and gave them rebirth. These musical forms—some of them worship songs and dances, others profane expressions of love for the spirits—are carried in the souls of Brazilian people. Fernandes gives them new life with superlative interpretations all her own. De Andrade's amazing musical documents formed the spirit of the songs so masterfully shape-shifted into a world where time and space have become one.

On these songs, Fernandes is joined by the masterful bassist, Zeca Assumpcao and the percussion colorist, Ari Colares. The musicians become interlopers from another time, but dropping in on charmed performances. Like A batuque, for instance, where the musicians are seduced by the hypnotic dance and render it ecstatically in "Rebulico." Other melodies are ruminative, —as in "Caitrinha"—, yet the dynamics of Fernandes' piano and Assumpçao's bass swirl so superbly that the dancers come to life as do whispering trees in the swishing of Colares' gourds and percussion.

"Antoninho" is a moving meditation intimating the interior worship of nature. Assumpçcao's almost imperceptible con arco is tantalizingly beautiful. "Candeias" has an ethereal glow and advances with magisterially augmented harmonics. The inner rhythms of the melody are magically explored by piano, bass and percussion, individually and in unison. "Praias" brings the seminal drama of ancient harvest rites alive redolent in the sliding rhythms of old. "Andarilho" displays Fernandes' virtuosity with staggering effect.

Clearly, this is flawless work from a major new artist.