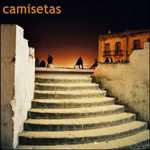 Camisetas, the album and the band, came about during a week-long residence at the Théâtre Pole Sud in Strasbourg, France, in September 2006. The resulting disc is very much a group improvisation, drawing upon the musical resources the players bring to the enterprise.

As such, your response to this record will be a function of how you feel about three musical phenomena.

First, whether you like the record depends upon how you feel about this kind of improvisational exercise. As with a live Keith Jarrett recording, the ratio of noodling to epiphanies is inevitably rather high, and it furthermore seems that the epiphanies don't make much sense without the noodling. By its nature, genuine collaboration like this is more a process than a product, penalizing short attention spans.

The second condition: the musical materials the participants wield. If there's going to be some noodling, you'll feel a lot better about it if it's noodling with elements you like. Camisetas has a very idiosyncratic bag of tricks: fast and slow rock 'n' roll, sound environments that sound like they would suit B- movies, and bursts of free improvisation. The filmic elements particularly, many provided by Arnaud Roulin's keyboards, dare you to label them ironic, like a lot of music by John Zorn. These can all be good things, but may not be for those who prefer a different sonic palette.

Finally, there's Médéric Collignon's screaming, much of it electronically sampled and re-sampled. Anyone who hasn't listened to a good screaming record since, say, John Lennon/Plastic Ono Band (Apple, 1971)—on which the ex-Beatle falls under the spell of primal-scream guru Arthur Janov—might be alarmed. To be fair, some of it might arguably be better described as "singing." In either case, it's sometimes kind of exhilarating, as during the climactic closing moments of "House of the Sleeping Dwarfs."

Still and all, Collignon is preferable on cornet, and there are some marvelous passages of that as well: plaintive and Lester Bowie-like on "La Shoe de Sue" and in rousing accompaniment to Maxime Delpierre's surging guitar on "Sheep, Sheep, Sheep." Collignon, with an impeccable résumé, is the undisputed enfant terrible of French jazz, and sounds completely in his element here.

The excellence of the celebrated Brooklyn drummer Jim Black, meanwhile, will surprise no one. What is striking about his role here, is how sympathetic a player he is: his protean competencies, equally suited to crispness and bombast, are acutely tuned to the needs of the moment.

On all three counts—the process, the materials, the screaming—Camisetas is a winner.